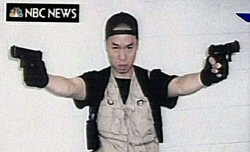 While researching the New York Times this morning, I stumbled across a Virginia Tech link. Referring to the horrible tragedy there last year, when Cho Seung-Hui went on a rampage and killed 32 innocent people, the Times quotes US government officials as saying it was the “deadliest shooting rampage in American history.” The phrase, according to my research, has morphed somehow over the last year and a half or so, and now the Virginia Tech killings are viewed as the “worst massacre in American history.” Hmmm. That didn’t sound right to me. I kept digging.

Well I think they’re forgetting something. A couple of somethings, actually…

Although it wasn’t a “shooting” rampage, per sé, it was still a murderous one. In 1927, sicko wackjob Andrew Kehoe, upset about school taxes, killed his wife before detonating homemade bombs at his Michigan farm (with all its animals tied up so they couldn’t run). That was bad enough. But what people in the East Lansing village of Bath didn’t know was that he had also planted half a ton of dynamite underneath the newly-built elementary school.

Bang. Thirty-eight kids and seven teachers, dead. Flesh hanging from street signs. As a mother, I cried when I read this:

Mrs. Eugene Hart sat in the street, with her two little dead girls, one in each arm and her son, Percy, lying dead in her lap.”

You can pick up the story here, but it ain’t pretty reading.

Ok, so the Bath school bombing wasn’t exactly a “shooting.” Got me on a technicality. 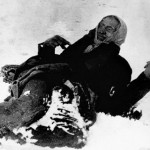 But how do the Feds explain Wounded Knee, where nearly two-thirds of the Sioux population (mostly women and children) were backed into a ravine and slaughtered? Several conflicting accounts were bandied about, but the math tells the tale: over 300 Sioux dead, compared to only 25 US Cavalry casualties — mostly from friendly crossfire.

So what about this? Does it not qualify as a serial killing? The Feds call it a “battle.” Well sweety, when the “battle” involves 230 unarmed women and babies…I don’t know about you, but that takes the “deadliest massacre” cake in my book. No wonder Washington failed to recognize it; seems old habits die hard. It wasn’t until Dee Brown’s 1973 book exposed the whole nightmare that people knew the real truth.

After Wounded Knee, this editorial appeared in the Saturday Pioneer newspaper in Aberdeen, South Dakota:

The Whites, by law of conquest…are masters of the American continent, and the best safety of the frontier settlements will be secured by the total annihilation of the few remaining Indians. Why not annihilation? Their glory has fled, their spirit broken, their manhood effaced; better that they die than live the miserable wretches that they are.”

The writer of this editorial? L. Frank Baum, author of another small, inconsequential piece of literature called The Wizard of Oz.

Ah-ha, yes. And shrouded in controversy as well.