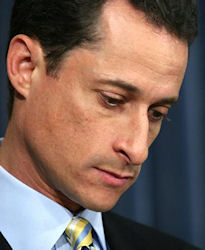 It’s happened to all of us, to wit: we makes our choices and we lives with the consequences. So it goes with US Rep. Anthony Weiner, who came clean about the racy Twitter photos, but started yet another political circus that won’t likely die down anytime soon.

1. Is he mental? Did he think in a million years that the truth wouldn’t be ferreted out? He should have had an emergency meeting with his handlers to decide the best way to control the bleeding after full disclosure. I’m shocked that he and his people would be so naïve as to think they could hide it. Have Gary Hart, John Edwards and Larry Craig taught you nothing? Do you think these women and Andrew Breitbart could sit on a powder keg like this and not chirp? Baffling…but I wasn’t there, so all I have is conjecture.

2. Wonder why he doesn’t pronounce the vowels in his name like the Germans/Austrians do (Wy-ner), which is consistent with the surname’s origin. Wouldn’t that have been easier on him his whole life? I guess it wasn’t his choice. Regardless…awkward for him right now. Eek.

I have one of those drinky tests today, where they make you swallow this nasty cocktail, then monitor you for three hours on how you react to its ingredients. Today is lactose, I think. Ick. It’s the last one in a group of three or four I’ve done over the past couple of months. I hate the drinky tests.

Man, for a minute there, I thought the Indians were going to keep winning and actually give us something to cheer about. What a relief that things are now back to normal, and we’re losing to the worst team in MLB.

Last night, I watched an HBO documentary on the life of chess champion Bobby Fischer. Weeeeird. I remember watching that coverage on TV. They preempted other programming to run constant footage of two guys at a chess board for hours, in complete silence. It was worse than watching C-SPAN. Or golf. Anyway, if you can, check it out. He was a tortured soul with a cornflake for a mother. No wonder he cracked up.

When I get a chance, I am going to sit down and read this story, because, as you know, real life is way better than fiction.

The Js come for a 2-day visit today, yippy! I pulled our Olympic sized swimming pool out of the garage last night and filled it with water, so hopefully the boys won’t freeze when they step in it today. Gonna be a hot one up here…

He’s apparently known throughout his district as a “spoiled frat boy.” Reports closer to his district are not surprised and no one locally is batting an eye at this. And initial straw-polls say that he’s done a great job at his job & this issue would not keep people from voting for him again. It’s the Republican media machine that’s latched on to this that’s blowing it way out of proportion. /rant The key difference between what he did and all the “family values” right-wing Republicans that have been getting caught with their pants down (and the list is WAY… Read more »