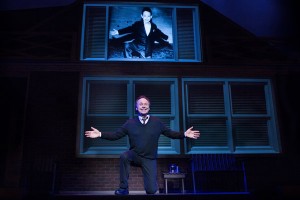 Since this traveling one-man show has been on and off Broadway for ten years now, you’d think I’d have heard about it. But I was clueless until a couple of nights ago.

While I’m not a lifelong Billy Crystal fan (yes, I enjoyed When Harry Met Sally and City Slickers, but I never followed his stand-up stuff, outside of watching him emcee the Academy Awards), I must say I was surprised and delighted to see a very real, loving (albeit sometimes rambling) portrait of his Eisenhower-era childhood on Long Island, and his larger-than-life father, Jack Crystal, who had a huge influence on his development as an artist and a man.

Jack was a record store owner (Commodore Records in Times Square was his lifelong career) and concert producer, which enabled his young son Billy (youngest of three boys) to meet and rub elbows with the hottest names in jazz at the time. Most entertaining were his stories about cutting up with Billie Holiday, and going to concerts with his dad.

Oftentimes, comedians come from sad, hurtful pasts that drive them towards covering up the pain with humor. Not so with Billy Crystal. He had what many would call a perfect childhood: living in the suburbs with parents who adored and encouraged him, and offered him every available opportunity to be who he wanted to be.

While the tribute is funny, it stalls sometimes, with Crystal obviously wanting to include every obscure story about every obscure jazz player who ever teased him or made him feel like a million bucks. And, obviously, it’s Billy Crystal, so the borscht-belt jokes about passing wind and the male libido were a bit too numerous for my taste, but bottom line: this is a man who adored his parents, and the show is an enormous thank-you card to them for all to see. I had tears more than once, especially when Crystal the actor put Crystal the comedian aside and described the two very dark days when his parents died. It was emotional and real and not contrived in the least. I loved it.

If you can find it on HBO or elsewhere, definitely watch it, especially if you’re a Crystal fan. I had no idea he was surrounded by all that great jazz his whole life. It was an entertaining look into what — and who — made him who he is.

On the Rat-O-Meter scale of five cheeses, I give 700 Sundays:

Nice review. I’d never heard of it. Oddly the first character I think of when I think of him is Jodie from Soap. I was like 6 when it was on TV. Did he talk about that show at all?

Thanks, Ross. And I’d totally forgotten about Soap! Wasn’t Benson a spin-off? And no, he didn’t mention it; actually, he didn’t mention much of his work at all, but there was one funny moment when he told about going to the movies as a kid, and seeing a film with … pause for effect … Jack Palance. Everyone laughed.