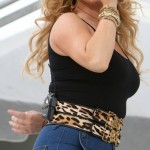 I am disgusted by some of the comments on various blog sites regarding Jessica Simpson’s recent weight gain. Words like “obese” and “pig” were slung about.

You know what? Shut up.

Like her new look or not, Jessica Simpson is far from “obese.” Calling her that is ridiculous and stupid. What is she, a size 8 now? Ten, maybe? What on earth is wrong with that? Are we so sick in this country with regard to female physical identity that now size 8 is “plus size?” I know…don’t answer that.

But here’s where Jessica falls off the wagon. (Either she fell off, or her wardrobe consultant did. Regardless, somebody needs to be slapped.) I refer to a longstanding observation of mine — yes, I’m quoting myself here:

Too many girls think that wearing shirts and jeans that are two sizes too small will actually make them look two sizes smaller.

So what’s wrong with the picture of Jessica? Simply: she is not fat, but what she’s wearing makes her look much heavier than she is. What’s up with the skin-tight tank top tucked into the painted-on jeans with a big belt to draw everyone’s attention to her problem area? Add to it the bare arms which should be covered, and hunny, you’re a mess, and you’re askin’ for it from the idiots of the world, so don’t say I didn’t warn you.

I’m not talking about wearing a muumuu, here. I mean, honestly. There are cute, smart ensembles that heavier girls can wear to complement their figures wonderfully. When I weighed 50 more pounds than I do right now, I did it. Worked in a band that played every weekend, and I always had nice, trendy evening wear *without* looking like I’d been run through a sausage casing machine to get into it.

I’m just saying that a skewed concept of physical beauty doesn’t only come from onlookers; it can come from a janked self-image as well. In other words, if you’re looking to exploit your … um … amplitude of curves, then rock on. That’s one thing. However, if you’re wearing skimpy, tight clothes because you think they’ll make you look thinner…ain’t happenin’.

At any rate, lay off Jessica. She doesn’t necessarily need to get back down to a size zero; she just needs a lesson in fashion subterfuge. 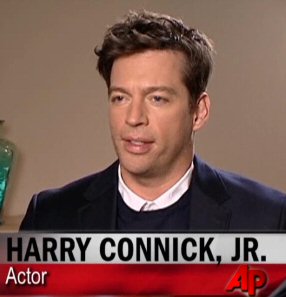 All right, “Hairy” Connick. I never noticed that he wore a hairpiece. I’m pretty sure that’s what it is. (And I know about hairpieces. Don’t ask me how I know; I just do.) Couple of giveaway hints:

Perfect ringlets with highlighting; the poofy thing at the part.

Maybe I’m mental and it’s all real. And maybe not. But again…if he wants to cover up his receding hair line, you know what I (and John Lennon) say. Whatever gets you through the night…

Hearing some awful bad things about Harry’s new movie, however. Of course, that could mean that I would really like it. And oh, my…what a smooth voice he have. Love to hear that boy sing.

Oh, I agree with you 110% on the Jessica thing. She was being totally trashed on E! last night. I felt so terrible for her. She is such a pretty girl. >And I hate knowing that I am now officially in America’s “obese” category. I have been in double digits pants size since…well…third grade. Ha. Depressing. *grabs candybar* ReplyRat Fink Reply:January 29th, 2009 at 7:44 amGirl, join the club. You know how I feel about “fat” humor anyway. I actually had a 7th grader tell me that she’d rather be called ugly or stupid than fat. Let that one sink… Read more »

Jessica should do whatever the heck she wants and weigh whatever she wants. The problem is that she’s not just a singer, she’s an entertainer. Just like bands with uniforms, or choirs with robes, we all know it’s just as much about the visual as it is the aural. As much as I hate to say it, that’s not what I would be money to go see at a concert. It has more to do with what she’s wearing, though. For the Jessica case, appearance matters big time. Really, it almost means everything in that realm. For us real people,… Read more »

Maybe 2 belts was a bit much. Ed Shepherd can pull off two belts but not many others can.

You have to give her some credit for attempting it, though. I mean, you do. I don’t… because I can pull off wearing two belts. I wear a lot of stuff that Jessica Simpson can’t get away with wearing, though.

Classic. Only you could pull that off!

I like Jessica. She had a rough 08. The Cowboys/Romo debacle had George W joking she be sent to the Democratic Convention to serve as a bad omen there. And do you remember what word Pam Anderson called her in response to the ‘meat’ T-shirt? Think ‘hoard’ with a W. and no D. That might have been named by the American Hypocrite Society as Outstanding Moment of 2008, if the AHS had such an award, or if they existed. But RF your point is well made; fashion subterfuge. That said, Jessica is far more shrewd than given credit for. Her… Read more »

I hate when people complain about size. It makes an awkward conversation. Skinny people are teased too when they are considered twigs. I never know what to say when my friends complain. I have never thought that size matters whether it be skinny, big, tall, or short. ReplyRat Fink Reply:January 30th, 2009 at 5:31 amYou’re right, Krissy. It shouldn’t matter. (So…I apologize for my height comment on the Cavs post.) Seriously though, who should care? No one. I think we could all say this, though: if you’ve never been there, you don’t know what it’s like. If you’ve never been… Read more »

You KNOW that good ole’ Dallas gurl is just showing off all that country-fried steak luvin’ from her Dallas Cowboys beau, Tono Romo

..but stop the presses – you didn’t know that HCJ had a rug??? Of all people – YOU should have seen the warning signs long ago! I’ve known since the first time I ever saw him on Will & Grace

PS…I heard someone refer to that sight as a “…muffin top…”???

Hey! I agree about Jessica! Gee I wish I were as fat as her! I hope Harry doesn’t have a hairpiece — that would just ruin it for me.