Cast of MM at the Emmys, complete with January's clown outfit
For the third straight year, my favorite TV show (and one of exactly two that I watch with any regularity at all) won the Emmy for Outstanding Drama Series. Not surprising. What was surprising was the baffling ridiculousness of January Jones’s dress. Yipes.

Christina Hendricks (on the left, in the gorgeous taupe gown) was lovely, as usual. I for one recognize her acting talent as well as the fact that she is a great physical role model for “regular” women. No worries, Chrissy.

My other favorite series (HBO’s True Blood) was nominated but didn’t win. It’s a rather goofy show, but cool that a saga about vampires and werewolves and other silly creatures has captured the entertainment world’s attention. I also like nominee Breaking Bad, but I never get to watch it for some reason. I’ve settled for the cheapskate recap vids on AMC’s site. 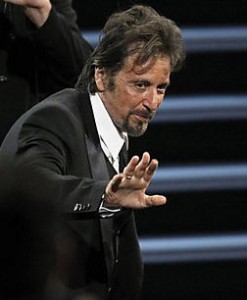 Most deserving was Al Pacino, for his role as Jack Kevorkian. It was by far his creepiest  (I’ve seen every Pacino movie since Panic in Needle Park and Serpico), and right up there with Michael Corleone on the believability scale. Home run.

Then there’s Glee. We won’t talk about that this morning — I’m in a hurry.

RF, still looking for the happy in Mondays

Which one is January Jones? In the blue thingy?

Yep, the blue thingy — whatever that is! She looks like a member of the Lullabye League. HA

This has nothing to do with the Emmys, but I just thought you should know that now that Manny is on the White Sox it seems me and The Thriller will be cheering for the same team. Hopefully in October.

I know…but please be kind and don’t rub it in. I wonder if he’ll play tonight…

I predict big things for the Tribe. It seems to me that the only thing holding them back is Mark Shapairo.

Shap Dog just keeps making the same bad decisions, over and over. Flippin’ Ground Hog Day up there, I’m tellin’ ya. I’m rooting for the Sox for the postseason, and hoping the Injuns can buy some sense in the front office. Injuries haven’t helped either, but sheesh…