It’s hard to go on with one’s carefree daily life when a pet is sick. Many of us know this firsthand.

Rousseau took a second trip to the vet at 7:30 last night. At first, she thought it was an infection, as the nictitating membrane — what is known as a dog’s third eyelid — was pulling up over his eye and making it retreat into its socket, indicating he was in pain. But the antibiotics and topical cream she gave him on Friday morning did no good (in fact, the cream eventually made it worse). So she put him on a different antibiotic, and said that if he’s not better in a couple of days, he will need to see an eye specialist in Akron. 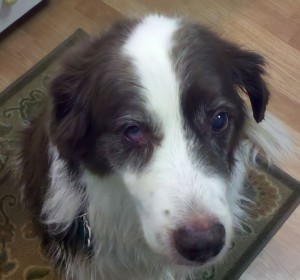 Looking sad after his bath yesterday

He and the Thriller just got up, and he looks a *little* better. We’re still on for the specialist if things don’t improve by tomorrow night.

Getting to work isn’t near as fun when something like this is on my reptilian brain. But the work still has to get done. Hey, you need to get busy too — have a great Tunesday, fiends. If you like, I’ll keep you posted on our precious Mr. Old Bones.

8 thoughts on “A nervy time”