And so it ended, on this day in 1970. It was a Thursday (I looked it up). That night, my local radio station (WOKY-AM, “Mighty 92” in Milwaukee) played an evening-long tribute to the Fabs, ending sometime late – I can’t recall the time exactly, but it was way after my bedtime as a 5th grader. I remember putting my transistor radio under my pillow so as not to be caught listening on a school night, and bawled crocodile tears onto the pillow case as the DJ said what a “great ride” it had been, and closed the program with “The Long and Winding Road.”

I remember getting Paul McCartney’s first solo album (McCartney) shortly after that, and playing it like 50 times in one day. “Maybe I’m Amazed” blew me the heck away. I couldn’t get enough of it. I cried over it.

Fast-forward almost four decades, and here I am, still loving the Lads, as my friends and family know all too well. Over the years, I’ve learned much of the “real” story behind JPG & R’s rise to fame, and I must say I am sadder as well as wiser for it. I’ve read almost every Beatles book ever published, and own quite a few myself. 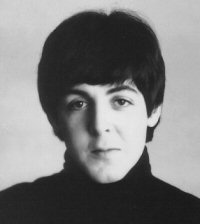 Most disappointing to me was to find that Paul was a bigtime control freak; a shrewd, shameless self-promoter with visions of personal grandeur and an ego the size of Paraguay. Near the end of the Beatles’ time together, the other three decided that Paul was no longer going to call the shots for the band, and they quietly and privately walked out on him. Then, appearing ever the boss and refusing to be outdone, Paul declared via news conference that he was leaving the Beatles, and that the band was no more.

Although the personality conflicts started as early as the Hamburg years (to be expected when four young men live, eat, play, work, sleep and travel together for months on end), the unraveling process really began with the recording of The Beatles – better known as the “White” album.

John thought many of Paul’s songs (such as “Ob-La-Di, Ob-La-Da” and “Maxwell’s Silver Hammer”) were “crap,” and bristled at Paul’s constant wild ideas for movies and business projects. George was sick of Paul forever telling him how to play things on his guitar, and Ringo walked out in disgust when Paul decided that he himself would play drums on a couple of tracks on the album. Basically, the writing was on the wall.

All this is not to say that the Beatles’ break-up was Paul’s fault. All four Beatles were very successful, and looking to go their separate ways. They were serious artists who had grown up – and apart. Yoko Ono was just one piece of the puzzle, despite widespread, erroneous belief that she was the cause of the split. [Still I couldn’t resist this photo op while at Madame Tussaud’s Wax Museum in Manhattan a few years ago.] Besides, with John’s untimely, tragic death, and George succumbing to cancer, I can’t say it all really mattered. The Beatles would have come to an end anyway.

Thank God we still have their music.

1 thought on ““A man appeared on a flaming pie…”