OK, must get motivated. Had a change of plans this morning, so I’m not going to Mansfield to meet a friend for breakfast. That means it’s time to get some school shopping done. I was going to do it tomorrow, but feh…getting something done earlier is better for this Olympic procrastinator. 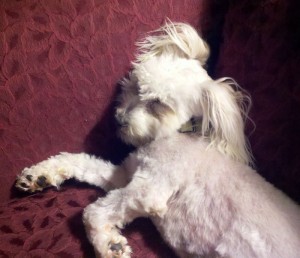 Worn out & hairless
Poor Drago had to get shaved! HAAaa. I couldn’t stop laughing when Bob brought him over. He’s full of energy, though, that’s for sure. Loves to sneak up on Rousseau, chase him around, etc. (all of which Old Granddad finds decidedly unappealing). The Thriller has taken to calling him “Milo,” from the movie The Mask, for the way he zips around the house like a water bug.  He looks like a shaved-down poodle, except being a Havanese, there’s no body to the hair on top of his head, so it flattens out. LOL poor puppy…but like I tell my students who hate their haircuts: it’s hair — it’ll grow back.

After getting acclimated to his surroundings, chasing everything and everyone, smelling the place in its entirety, and completely annoying Rousseau, he promptly climbed up into the corner of the couch and checked out.

All right, enough already. Time to get going. Over’n out! Happy weekend.

Did you order your bulbs? I have the Queen of the Night tulips — they are spectacular! More of a deep deep purple than black….pretty!

Yes!!!! I ordered a dozen of those — can’t wait to see them! I also got a variety pack of 18 mixed daffodils and tulips, and a dozen “Fat Tuesday” hyacinths in blue and yellow. My garden should have a bunch of color come spring!

Oh pretty!!!! That will be something to look forward to!