Isn’t it just all about speed? At least in America, it is. We Americans have more speedy solutions than any other country in the world, it seems. Drive-up banking, express toll lanes, drive-through food joints, self-checkout at the grocery and Home Depot, microwave meals in a minute, movies on demand, zip, zoom, ka-chang….you’re outta there.

Then why, I wonder, are we so slow compared to other countries when it comes to broadband?

Couple nights ago, I took an upload/download speed test at speedtest.net. Here’s how I scored after repeated go-rounds (click the picture): 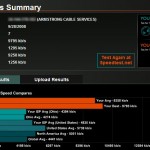 Now, the Thriller pays more per month to get “business grade” speed, so my zip-chang is a little faster than the average Joe’s. But wait till you see how it stacks up to that of other countries. Check out this chart from a study done by the Communications Workers of America union, which shows where we stand in comparison to other countries: 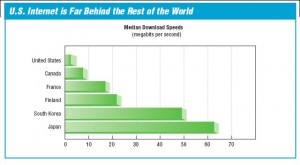 Look at Japan – Sheefus, Mary & Joseph. Sixty-three MBPS compared to my nine? What’s up with THAT? In fact, the report states that the US – the country that invented the Internet – is “15th behind other industrialized nations in the percentage of the population subscribing to broadband.” Friggin’ Luxembourg has better download speed than we do. That just ain’t right. According to the study, Americans pay more for sub-par internet speed than their neighbors across the sea, too.

Well, turns out the answers aren’t always in the numbers. As I read article after article about it, hidden truths seeped out. The one that struck me was the logistics of upgrading/building the broadband infrastructure in the US as compared to doing so in Japan. I’m talking about sheer size:

Of course it’s going to be easier to set up tighter, faster servers in small places like Japan or South Korea. Unfortunately, despite the movement by the CWA for Congress to step up improvements, I think most American ISPs would just as soon blather on about how good 5 MBPS is, and squeeze us for the $60/month, hoping that we’ll continue to be dumb & happy about it.

But sixty-three MBPS? *scratching head* If that don’t beat all. (Actually, it does.)

Americans are all about being the biggest, baddest, best and fastest about everything, and we get all bent out of shape when reality hits – we’re WAY behind on LOTS of things… like HEALTHCARE for instance…
Oops, sorry. My soapbox is showing….

Who are we behind on healthcare, though?

TRO – not to speak for PK, but she might mean countries with socialized medicine. I know there’s a trade-off for everything (higher taxes, pre-approved doctor lists), but at least everyone in those countries can *get* health care.

But can they? Waiting lists for surgery in Canada and the UK are months (typically 18 weeks on the short side in Canada). The UK reports that there are waiting periods of over 45 days from the time a doctor refers someone to chemotherapy until the time they first receive it. That’s a long time when you have cancer. In 2007 over 345 people died in UK hospitals due to bad sanitation. And I mean rooms that were filthy, not just a roaming staph infection. An average of 12 weeks waiting time in Germany for surgery. Breast cancer patients waiting… Read more »

TRO – time to climb out from under the rock you’ve been living in, stick a crowbar in your pocketbook & pay for some more Google time. Or better yet, buy a plane ticket & spend some time living outside the US. Or even better yet – take some time to PONDER the numbers that you find & try to figure out what the backstory is. The US Healthcare system as it stands now SUCKS – because it’s only for the privileged few that can afford it. What about all the people in the US who need that chemo or… Read more »

Here’s a statistic for ya: Doctors kill more people per year in the US than guns do. Whaddya call a guy who graduated last in his class at Medical school? Ans: Doctor. NB: RF can speak for me anytime. The US ranks third from the BOTTOM of the list when considering mortality and morbidity – lower than some third-world countries. Why? Because people don’t have access to the care they need. I spent 20 years in the healthcare field and in the US, healthcare is run by the insurance companies and the pharmaceutical companies. What TRO is spouting is pure… Read more »

My upload speed is that high.

Holy carp – I go away for one evening and look what I find when I get back. Can’t leave you guys alone for a minnit.

Welcome to the ward, BoomR!

But ax me if I looooove your upload speed….*wink wink nudge nudge say no more*

“TRO – time to climb out from under the rock you’ve been living in . . .” Now THAT’s classy debate. I guess I must be privileged because I have excellent health care, which by the way has had to pay for specialist care for my wife (breast cancer scare) and a rush CT for my oldest son due to serious headaches. Both things were handled quickly (ten days for the wife and same day for my son). Now I don’t know if this privileged health care is available to normal Americans, but if it is I would check it… Read more »

“Trust me when I say most inner-city public hospitals are better than what I saw there.”

Oh yes, I forgot, no reason to trust me because what I did was just spout “pure propaganda put out by the aforementioned entities.”

Now excuse me because I got this horrible goiter and I hear they lance them quickly down in Cuba. I have to get in line because SO many Americans travel down there to get health care when they aren’t traveling to Canada and the UK.

Wow. This became heated…. Wanting to socialize anything seems kinda scary to me. Healthcare, internet, you name it. It’s a slippery slope to start socializing anything in such a capitalistic environment. It’s scary enough to set standards on pay scales and such, let alone to have the government be in charge of what kind of healthcare I recieve or even how good my wi-fi connection may be. Not to mention the kind of tax hike that would be necessary to “provide enough revenue” for the government to take care of these issues. It’s hard to have power to the people,… Read more »

“Now THAT’s classy debate” I majored in classy debate in college…. You still missed the original point. The end of PK’s post said “…but at least everyone in those countries can *get* health care…” – to which you replied, “But can they? …and then you started babbling on about waiting lists in Canada, Germany, and the UK. And more waiting in Quebec. And then FINALLY you make a small concession that “maybe” they *can* get it, but they have to wait. I’m sure there are PLENTY of people in the US who would KILL for the chance to wait vs.… Read more »

CRAP! Where’s the spell/grammar checker when you need it? That should be “Who’s watch…”

“GAWD I love it when you talk dirty to me like that. So you’ve traveled extensively around the US over the past few years and have surveyed the condition of inner-city public hospitals, eh? Is that what’s empowering you to make blanket statements like that? Amazing! I grovel at your feet…” Ahh, sarcasm, what would we do without it? Psst, it’s not very attractive though. Just so ya know. In fact, I have been to, at last count, 42 of the 50 states, and, because of my career field I have had the pleasure(?) of having to visit a number… Read more »

Health care? Don’t get me started. I’m one of those “unfortunates” that have no insurance. I could be the poster child for just how difficult it is to get health care in this country without money or insurance! I am lucky, though. The clinic I go to has helped me out immensely. You still have to pay some, but at least I can get the basics done. Now, if cancer (God forbid) comes along – I’m screwed. I could go on about what a joke “free” dental care is, too, but I’m sure that Finklestein is about ready for us… Read more »

“Ahh, sarcasm, what would we do without it? Psst, it’s not very attractive though. Just so ya know.” LOL Not very attractive, indeed, yet you chose to reply in kind to my first post – making you no better than me (despite what you seem to think of yourself) – so get off your high horse please. You’re down in the gutter with the rest of us, face it “In the end no minds were changed.” ..and how do you know that no minds were changed? Wow – do you ever take the blinders off? Clearly YOUR mind has not… Read more »

BoomR, Mavis, PK, TRO – you know I love you all! A little feisty debate never hurts, although you probably know I’m fighting the urge to go around and hug everyone and see if your karma’s all intact.

And now, I’m cooking for Lars. But first, I gotta get into the Maserati and run to the Kroger….

I’m with you, Mave. No health care coverage. Had BCBS through hubby’s employer until last month when he got laid off. Premiums: $375/month. Plus copays. Plus deductibles. Oh, and if they didn’t feel like they should be covering something, they just didn’t. Then when he got laid off, COBRA generously offered us the opportunity to continue our coverage at the low, low rate of only $635/month. And if we hurried, they would include a set of Ginsu knives at no extra charge. Operators are standing by…. The fact remains that every American is one major illness away from financial disaster.… Read more »

My download speed is about 17628 kb/s. Acceptable, but nothing to write home about.

I know, Sam. It’d take too long for the email to send.