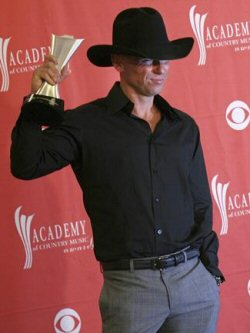 Admittedly, I couldn’t pick Kenny Chesney’s music out of a line-up. But I have to tell you I admire the guy.

I guess winning Entertainer of the Year at the Country Music Awards for the fourth straight time gives one some license to opine. Apparently, for the first time in its history, the Country Music Association (or whatever governing body makes the rules for the CMA awards) decided, in their infinite wisdom, to let the fans vote for the top winner. Hey, that’s just like American Idol! Cool! (*sigh*)

What he said about their decision — especially after winning — was gutsy, but right on target:

I don’t think it’s right that they picked the one award that means the most, that all artists sacrificed the most for, and turned it into … a sweepstakes, to seeing who can push people’s buttons the hardest on the Internet. It’s a complete disrespect of the artists. I think because of that, it really diminishes the integrity of the work.”

I wonder how the CMA people will respond, or if they will at all. No matter, though. Anything that exposes the absolutely embarrassing non-class of American Idol gets my vote. Heh. I made a lil joke there. “…gets my vote.” Get it? I’m punny.

I must agree with you, RF. As you know, I’m a big country music fan. From things I’ve read, most do NOT want to be compared, honored or voted for in an “American Idolesque” manner! At least not the serious country artists. CMA has a new show out. It’s their own version of Idol! Very disappointing. I did agree with what Kenny had to say. Even though I think he sings like he has duct tape over his mouth and he’s just blowing noise out of his nose, I must give him credit for his writing skills. I think he… Read more »