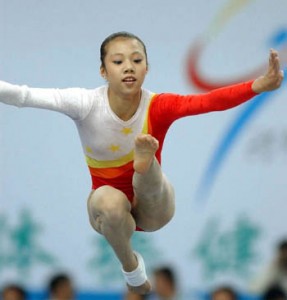 The Chinese women’s gymnastics team from the 2000 Olympic Games was stripped of their bronze medal yesterday, after the IOC confirmed that Dong Fangxiao, pictured here, was not the minimum age of 16 when she competed (she was only 14). The bronze instead went to the USA team.

Yabbut…what about 2008? I yammered on about this very issue, after I watched the Chinese “women” take the gold medal, with the USA coming in second. Click over to that post and look closely at the photo of the Chinese team. If all those girls are 16, I am Mary on a donkey.

This is not to say that the US hasn’t had its share of cheaters in the Olympics. Rather, it is to ponder why the IOC would swiftly rule on a happenstance case (the error wasn’t realized until Fangxiao recently applied to be a team official and listed her birthdate on the paperwork, and someone put two and two together and got 14), and not the more obvious violation of just two years ago? Who knows…maybe they are, and maybe they will act — it’ll just likely take another ten years.