The Finkmobile. She is cursed.

Bambi’s mom. She is dead. 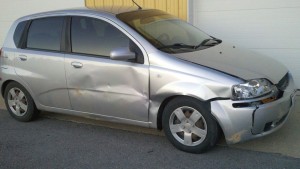 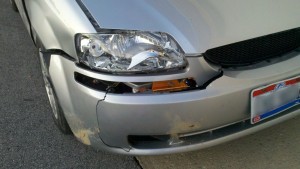 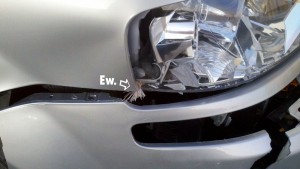 After all that hassle with the body shop on the last go-around…now this. Same side of the car, same sort of damage. What can you do but laugh? (And pay the deductible?)

It was dark yesterday morning, and — irony of ironies — I decided to take a main state route to school instead of the rural one, in order to avoid the deer. Eeeeyep. The gigantic doe appeared out of nowhere, about five minutes outside the city limits. I didn’t even apply my brakes until after the collision. My priority at the time was not locating the deer, but avoiding the oncoming school bus, which I did. Fortunately, I was near the Bailey Lakes General Store, so I hobbled into their parking lot, got out, and eyeballed the damage.

After getting under the front end and dislodging a piece of bumper that was stuck between the fender assembly and the brand new tires we’d had mounted just last week, I got back on the road to school, as the car was basically driveable. I must admit though, to quote Lynyrd Skynyrd: I was shakin’ like a leaf on a tree.

Of course, the first question my middle school (and some high school) students asked was, “Did you go back and get the doe so you could take it home and eat it?” *massaging massive headache* Yeah, sure thing, kids. That’s what I did, yep.

At least she was gone by the time I drove home from rehearsal last night. I dreaded finding her there. Actually, a colleague called me on his way home from school and told me he couldn’t find it on the side of the road, so that was a good thing. An avid deer hunter himself, he added, “Some hillbilly probably picked it up and cooked it for dinner.” Ha. Anyway, nothing like returning to scene of the crime and discovering the corpse still there, indicting you with its dead eyes. Glad I avoided that.

So, once again, we start the process of estimates, paperwork, phone calls, appointments and repairs. One thing’s for sure: we won’t be going back to the World’s Worst Body Shop Ever. I’m no good to anyone if I’m sitting in jail.

Fink out (of the deer huntin’ bizniss)

Hey, those dings, dents and crunches are badges of honor!

You’ve been through quite a lot with that little car and made it without a hospital stay!! Just glad that you’re ok, sweets!

Sure glad that you’re OK. Sorry for all the extra hassle this adds to your life. Maybe GM, unknown to you, placed a deer finder somewhere in the chasis of your car. I stupidly did some damage to the side of the frau’s van last summer. I went to Johnsons Body Shop on Union Street. Was very satisfied with their work, but don’t know if they are the most reasonable. My insurance company was OK with their price.

Yipes – is this number 3 (counting the box off the truck)? Maybe you’re done for a while.

I don’t know how you managed to go through with your day. I would have been a crying mess and gone home to bed. Glad you are ok!!

Hey thanks, everyone. Cripes! PK, this is actually #4 — my daughter-in-law was hit by someone while driving it awhile ago. All this in the last 20 months! Suz, it was a very weird day. I was like…I dunno…shaky all day long. Kind off my pins, ya know? It was good to get back home (without dragging any more wildlife around!).

RD – we are taking it to Johnson’s tomorrow (well, #1 son is while we’re both at school).

I just want to get this ordeal over with — AGAIN. LOL

Thanks, CM. I’m more mad than anything!

But rehearsal last night was a step in the right direction.