Happy America Day, fiends! And, as was pointed out on Facebook by someone this morning — Happy Egypt Day, as their “independence day” is today as well. 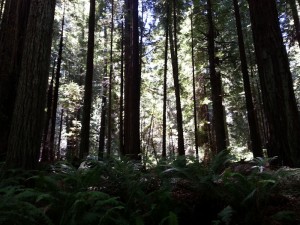 The sun peeking through a stand of redwoods (northern California)

As I’ve been up since 4 (darn time change again), I took the opportunity to go through my phone to find some photos I may not have shown you yet. So I will yammer on relentlessly while throwing in a picture now and then, OK? OK.

We’re in Rock Springs, out-in-the-middle-of-nowhere-Wyoming right now. The town is just beginning to wake up. I’ve had some time to reflect on the last three weeks, and boy has it been wonderful. I’ve said before that this is probably the last Odyssey of this length, as our lives will change now that seminary is done and the job search will commence in six days. 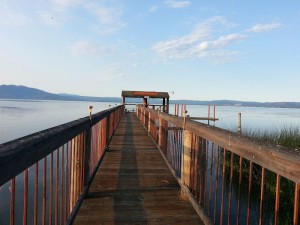 View from the pier on Clear Lake, outside the Featherbed Railroad B & B (Nice, California)

Although he officially “retires” at the end of this month (his 62nd birthday), the Thriller is still on the market for his counseling gig. For that (and other) reasons, our summer getaways will be shorter from now on, which is fine. We’ll still make the best of them, and yes — Odyssey 2014 is already in the works.

This voyage has been about wide-open spaces, yes? We’ve seen a bunch of them, from the cattle ranches of the Dakotas to the endless expanses of Utah. What a thrill to see our country in this way. In fact, I highly recommend it, and will write about it, courtesy of several of you who have expressed your own interest in taking a Great American Road Trip. Stay tuned! 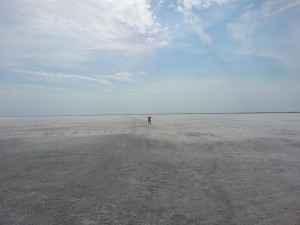 Speaking of Utah, I had a ball on the Bonneville Salt Flats yesterday morning. I ran out a couple hundred feet onto the hard, dry salt pan, turned and waved at the Thriller, and just about got blown over several times by huge gusts of wind. Talk about wide-open expanses of a totally different kind, wow.

Today, we revisit — if only briefly — some sights from the Western US Odyssey of 2011. As we head towards Lake Winnebago, Wisconsin to spend some time with the Thriller’s mom, we will cross paths with Keystone, South Dakota: home to Mt. Rushmore. It’ll be nice to see the old boys’ craggy faces again. We also plan to visit our favorite Black Hills restaurant, the Powder House Lodge, if we can. Best filet mignon I’ve ever had.

Until tomorrow then — off we go, off the interstate and into the hills. Yay! Have a relaxing and enjoyable holiday.

Wow, what an adventure it’s been. I’m sure I speak for all the fiends when I say thank you for taking us along! Thank you for posting some beautiful pictures! I still go back and look at them…and dream…then *sigh*. :-/ Now it’s time to look forward to getting home! We all miss you guys, but are thrilled that you’ve had this opportunity to explore our great nation. Safe travels today, luvs! ReplyRat Fink Reply:July 5th, 2013 at 8:38 amThanks, Mave — it was a long day, but a comfortable night at the Big Sky Lodge. We’re one day closer… Read more »