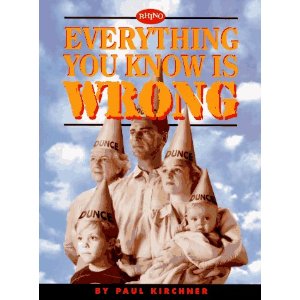 That would be us.

I’m leafing through a delightful — albeit rather snarky — book, written 15 years ago for the purpose of setting straight those of us who occasionally subscribe to (and unwittingly disseminate) erroneous information. Call it “Conventional Wisdom Takes a Hit.”

In his book, Everything You Know is Wrong (a slightly impertinent title, with the cover photo to match), Paul Kirchner delivers the real goods on dozens of longstanding “truths” in the areas of science, history, entertainment and culture. Behold a partial list: