As much as I loathe what he did, I think when compared to the penalties levied against other pro athletes who have run afoul of the law, Michael Vick got the shaft.

He killed dogs, lied about it, and got 2 years in jail. By many accounts, this was completely justified. Heck, if they’d asked me, I would have said 2 years was a walk in the park for someone who had watched – and taken part in – the hanging, shooting and torturing of innocent animals.

[If PETA had their way, he’d have been lynched in public.]

Next case. For (always bitter) Browns fans like myself, this is a specifically ouchy memory. Remember Kevin Mack? Sure you do. He was another pro athlete for whom money, talent and fame were not enough. He had to add cocaine to the list, and it landed him a 6-month jail term. Six months? On a first offense with no prior record? Almost anyone in that position back then walked away with probation and community service. I remember the outcry from the Cleveland press and the football world in general, deriding the court system and the NFL for making “an example” out of Mack. 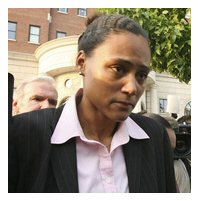 Next: Marion Jones. Another liar who broke the hearts of all those who supported her, defended her, and most importantly, looked up to her. She cheated in the Olympics, deceived an entire country, made fools of those who trusted her, and betrayed the kids who wanted to be like her.

She got 6 months. And the other liar on her level, Roger Clemens, should get even more, since he’s taking his lies to even loftier heights of insanity. But that’s another post for another day. Let’s get to the point (and I do have one, I promise).

Vick killed some dogs. Jones took steroids, and Mack bought cocaine. Those are all bad things, for which each athlete paid (or is presently paying) in jail time. But then wait….

What about Ray Lewis of the Baltimore Ravens? Charged with murder and aggravated assault in 2000 (do you find it at all strange that they never found his blood-stained white suit?), he never served a day. Instead, he agreed to rat on his homies and walked free.

Leonard Little of the Rams rammed his Lincoln Navigator into the car Cindy Gutweiler was driving, after he ran a red light. He was skunk drunk, with a blood alcohol level of .19. Did Cindy press charges? Nope. She couldn’t, because she died. Little served 90 days and got 4 years probation.

And I won’t even go into the wife beatin’, crack smokin’, rapin’ and pillagin’ delinquents of the NBA. It is amazing how many commit felonies, then walk out of the courtroom, free men.

Of course, I would be remiss if I didn’t mention the biggest thug of them all: 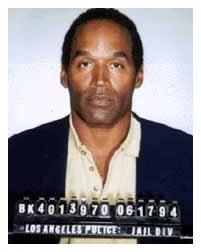 Still walking free, still making millions – although the piper just might catch up with him in September.

I read on somebody’s op-ed column that we can’t compare cases. The justice system deals with individuals with myriad inconsistencies, and with humans who are imperfect, so we cannot expect perfection from the legal machinery all of the time.

Oh yeah? Just wait until it’s *you* sitting at the defense table, pal.