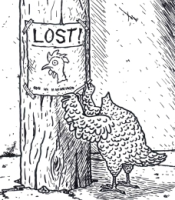 Have you seen my…? Yipes.

It has begun. Going to be different this year, having my Dinner Theatre in November instead of March. That means we hit the ground running, fiends — not that we don’t anyway when we prepare for the musical in November, but it’s a whole different setup.

I’ve been told by wise people over the years that there’s no use worrying about what’s to come, because stuff is going to happen anyway, so why not just enjoy the ride? Hmm. True enough. I just wish it was someone else’s ride.

Speaking of which — I need to get a jumpstart on this day. Much remains to be done before 8 a.m., so off I go. Have a great day, luvs.