It’s happened to us all, I’m sure, at one point or another. Several personal instances come to mind: 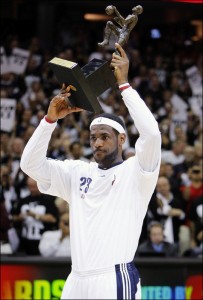 And did I mention last night’s NBA Eastern Conference Semifinals game? Shoulda seen it coming, when LeBron had like 11 points in the entire first half. Was it his elbow injury? Was the MVP pregame ceremony a jinx? Regardless, the nagging, sinking feeling returned:

The Cavs can’t win without him. Or at least they can’t win it all.

When’s the last Cleveland win with LeBron on the bench? March 2010, when they beat San Antonio. But their record this season without James: 1-9. The numbers tell the tale, as they will at the game Friday night in Boston, some of which I hope to see on TV in my Missouri hotel room.

I know that one day, Cleveland sports might bring home a championship. I’m just not sure it’ll be this year.

3 thoughts on “When all the wheels fall off”