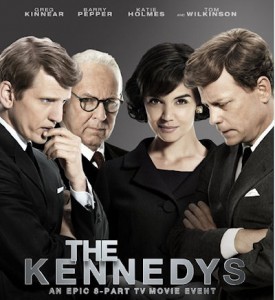 Over the last few days, after putting the Js to bed and collapsing on the couch, I watched all eight episodes of The Kennedys, a miniseries that caused lots of hoopla a few months back because of what The History Channel, in their refusal to air it, called “inaccuracies.” DirecTV rejected it, too.

Hmmm, lessee here. Boozing, wh**ing, prescription drugs and mob ties. This is news? This is scandalous to bring up 50 years later? Honestly, hasn’t this been hashed over and over in print and film for decades?

Personally, I thought Greg Kinnear (JFK) and Barry Pepper (RFK) were outstanding. I wonder how many hours they spent analyzing film footage of their characters. Right down to the very gesture, they channeled Jack and Bobby. It was completely believable and entertaining.  Tom Wilkinson, who I really enjoyed as Ben Franklin in the HBO series John Adams (and for which he won a Golden Globe) was brilliant as patriarch and megalomaniac Joe Kennedy.

The only weak spot was Katie Holmes’s accent. Lordy it was bad. Cross between a Brooklyn housewife and Scarlett O’Hara. Bizarre.

Anyway, the History Channel and other networks were afraid of accusations of right-wing conspiracy, because the show did not paint the Kennedy men in an altogether positive light. I beg to differ. I submit that the script depicted a family in a constant state of perseverance in crisis; of trying to do right by the country while failing sometimes as husbands and fathers. Hello, it happens. And for some, it happens on a grander scale. So what? Compared with what has come after, is “Camelot” that sacred a cow? And artistic license in historical film is not a new concept. Every filmmaker doing this kind of production has employed it, and in this case, it was done wisely and tastefully.

That said, I did wonder a few times: “Where’s Eunice? Where’s Teddy?” They, along with a couple of other K-sibs, were never mentioned. At. All. Never even depicted by random children in the background. Maybe it was too much story, as the tale picked up before WWII and ended with Bobby’s assassination. Still, it was kind of confusing.

But “controversial?” No way.

Bottom line: for whatever “inaccuracies,” I was completely entertained, and so very impressed with the work of the three lead actors (Kinnear, Pepper and Wilkinson). It’s worth watching for that alone. You end up really “pulling” for Jack and Bobby. Therefore, the actors did their jobs. Home run.

So this wasn’t a bona fide review, per se, but I highly recommend it. Go watch it, wouldya.

Hey, I’m off to start the long process of getting the domicile ready for three weeks of wanderlust. Yep, I be excited. Happy Finkday.

..and so where did you find it? Netflix?