So. When your car engine stalls, you drift off to the shoulder of the road, or stop and put your flashers on. 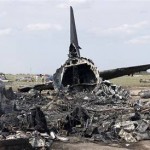 When your airplane engine stalls, you fall from the sky and die. Or, if you’re lucky, you land in a tree and escape with your life.

I know, I know. The conventional defense is delivered eloquently at epicdisasters.com:

While airline disasters are spectacular and often cause tragically large losses of life, it’s worth noting that airline travel remains among the safest modes of travel. In a statistical sense, airplanes are far safer than cars. Each day, three million people fly. In 2000, commercial airliners carried 1.09 billion people on 18 million flights, while suffering only 20 fatal accidents. On the other hand, automobile accidents kill more than 40,000 each year in the United States alone.”

I hear it, I read it, I see it, I understand it. But it’s the “tragically large loss of life” I struggle with, feel me? I suppose there are those who say, “Oh well…when it’s my time to go, it’s my time to go.” Agreed. But I’d rather not go that way, if it’s all the same to you. As many car accidents as there are, I would think that the majority of them do not end in a ball of flame with the passengers trapped inside — if not dying from incineration, dying from smoke inhalation (although I’ll concede that there are plenty of nasty ways to die in a car, too, and on a boat and at a football game and in the grocery).

But there can be minor car accidents. Fender-benders. You can survive a massive heart attack. Is there such thing as a “minor plane crash?” If I’m making up percentages, I’d say 98% of the time, no. Even at an altitude of, say, 200 feet, when you ram a 182-ton aircraft even gently into the ground, bad things are probably going to happen to the jet fuel and you’re going to hurt people. In a car, mechanical failure often means you’re stranded at worst. In a plane, you’re stranded, and on fire. No thanks.

Years ago, on a flight from Cleveland to Denver, I had the good fortune (???) to sit beside a commercial airline pilot, who was snagging a ride home to Colorado. We struck up a conversation while waiting to taxi to the runway, and exchanged what we did for a living. I was quick to tell him, “I’m terrified of this experience, and it doesn’t get any better with time and repetition.” He was kind and encouraging, and only slipped up once, when he told me, “The most dangerous times are taking off and landing. You burn that much jet fuel at high speeds and it can be lethal.” Right. Thanks for that.

Yesterday’s news didn’t help me process my paralyzing fear of airplanes. Gotta keep trying. But for now, I choose not to fly.

In other news — it’s the first day of school. Yay!