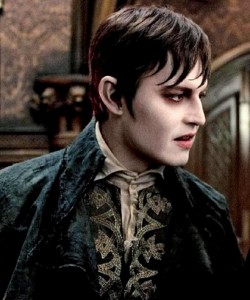 RtB fiend Will posted a link on my Facebook wall last night: the trailer for the new Tim Burton/Johnny Depp movie, Dark Shadows. Um…it’s a comedy, people. WHAT?? Talk about a wholesale paradigm shift. Here are my initial reactions:

Second — it kind of comes off as somewhat Twilight-ish. I don’t know how I feel about that yet.

Third — There’s that familiar Depp puzzled-and-grossed-out look again. Five times, at least, in the trailer. I swear he applies it to every comedic role. Does it work for you?

Fifth — Perhaps the initial premise of Dark Shadows was something Burton felt he couldn’t take seriously, given the tidal wave of negative backlash to the Twilight films (honestly, get over it, right? It’s a movie series, fuh cripesake. Don’t like it? Don’t watch it.). It’s definitely a smart-aleck parody.

Sixth — This is another movie in which Depp is not pretty. No likey.

At first, I was truthfully a bit peeved. The thought immediately popped into my head, “He’s trashed the premise; ruined it.” Where was the creepy music, the alternating sadness and madness in Barnabas’s demeanor, the mists and secrecy and quiet, tortured dignity? The dysfunction of the Collins family appears in garish, cartoony overdo. What am I to make of this? Then, as I watched it again, I figured this might be a case of just taking something for what it is: a director’s wacky, quirky individual interpretation of a “classic” tale. He’s done it before. It’s who he is.

Regardless, I’m so seeing it.

Cripes, is it Finkday yet? Why yes, I believe it is.

Like you, I thought- they have just ruined a classic!! Then I watched the trailer….HAAA! It looks hilarious! I wish Johnny was a bit prettier in this, though. I also noticed that Burton has his lovely wife playing a role, too. I’m interested to hear what audiences say after seeing it. And, I’m anxious to see what the Fink rates in on the Rat-O-Meter! :0)

We should go see it together, Mave. The Thriller will have no interest whatsoever!

Studio: “Hey Tim” Tim: “Whatsup” Studio: “Well we were hoping maybe you could make us another movie..” Tim: “Ok like..” Studio: “We don’t care, just make it “Tim Burton-y” Tim: “I’d love to. As a successful middle-aged filmmaker I have no problem with churning out mass appeal assembly line versions of what were once my own passionate and unique visions. I’m older now…this is more of a hobby. I don’t know what self parody means. I have purple glasses.” Studio: “Great Tim thats perfect.” Tim: “Let me call Johnny.” — Tim: “Hey we’re making another…” Johnny: “…the usual?” Tim: “Yeah… Read more »