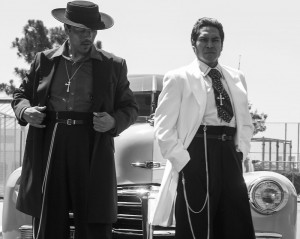 Who’s that whisperin’ in the trees?
It’s two sailors, and they’re on leave.
Pipes and chains and swingin’ hands — who’s your daddy?
Yes, I am.

Until this morning, I had absolutely no idea that the story of the song “Zoot Suit Riot” (a song I’ve loved since the 90s) was based on real events. Huh. Whaddya know. Who says you don’t learn anything on Twitter?

The “zoot suit” was popular with Latinos living in the Los Angeles area during WWII. Featuring long-cut jackets, high-waisted, baggy pants, and topped by porkpie hats, the suits were worn as a metaphorical badge of cultural pride. However, they were viewed by white Americans as wastefully extravagant, and disrespectful to fighting men and other Americans who were sacrificing fancy things for the war effort.  They called themselves pachucos, and soon attracted the ire not only of police, but also of Navy sailors on shore leave — which clarifies the meaning of the first two lines of the song. Ah-haaaa. (Now I get the pachuco reference in the silly-but-awesome movie, too.)

Anyway, do you know the song? Here’s a clip:

When I think of race riots in LA, Watts enters my mind first. I had no idea the violence stretched back this far. Me, thinkin’ I’m all history nerd and stuff.

Man, I’m lazy this morning. But I’m looking forward bigtime to tonight’s journey to Cleveland (fighting traffic for the home Indians game and the Cavs watch party at the Q, yikes), where we’ll see Postmodern Jukebox at the House of Blues. Wahoo! Fotográfias tomorrow.

Several years ago I watched the 1992 movie “American Me,” the Edward James Olmos film. There is this flashback scene where the main guy’s (Santana) parents were beaten, raped and killed by sailors in the 40’s. That started my research on the Zoot Suit Riots which until then I was clueless. Riots had a huge impact on Caesar Chavez.

Postmodern Jukebox is a bucket memo for me…excited for you and cannot wait to hear about it. Peace!

I had no idea! I felt kind of…uninformed, haha

I’ve since read that the riots did have a big effect on Chavez and Malcolm X. And I’ll post about PMJ tomorrow for sure!