Ok, this is bizarre. And funny. It’s one of those times when you read an article or story that is quite serious, and then it delivers a huge punch line at the end that makes you laugh out loud.

The whole sordid tale about British radio announcers Russell Brand and Jonathan Ross is a head-shaker. The articles are long and involved, so here’s the abbreviated version (full link to follow): 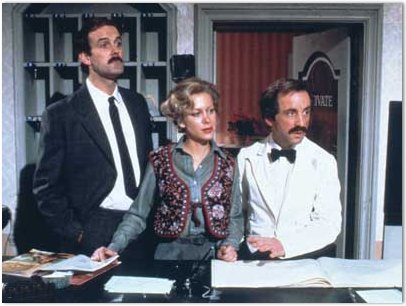 I’m reading along, and it seems that a 23-year-old girl was having a fling with Brand, age 33. Then the guy found out the girl was the granddaughter of Andrew Sachs, known worldwide for playing Manuel, the Spanish waiter in the hilarious BBC comedy from the seventies, Fawlty Towers.

Well, one thing led to another, and there was Ross, back on his radio show with Brand, making sexually lewd comments about Sachs, now in his 70s.

The granddaughter — along with the British public — was horrified by the tasteless remarks on the show, and now both announcers have been fired.

I felt terrible for the girl. She was quoted in the article as being profoundly embarrassed that her grandfather had to not only endure a disgusting experience (seems the guys also left nasty voice mail messages on his phone), but to also be told intimate details about her love life. She clearly wanted to protect him, and she also felt personally violated by having her private affairs made public by a couple of morons on the radio. No woman should have to go through this. I was angry for her.

One of the last paragraphs contains the innocuous sentence, “Miss Baillie…dances under the stage name ‘Voluptua’ in [the] burlesque troupe The Satanic Sluts.”

Well no wonder she was offended. Ok, I’m being snarky. If the gal wants to dance with the Satanic Sluts, then, you know…like I always say, rock on. I just laughed at being swept along by this terrible story (and it is really terrible), picturing this poor, embarrassed girl…I guess I had a different mental picture of her in mind.

You can read more about it here. Seems the Beeb have their work cut out for them…yikes. But hey, at least they don’t have Howard Stern.

5 thoughts on “Weirdness from across the pond”