Welcome to WW. I should make this a new category, because really, as difficult as it may be for you to believe…people are awfully strange sometimes. 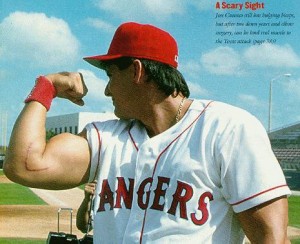 Why was Jose smuggling fertility drugs across the Mexican border into the US? Gee, I wonder. How about just because he’s a nice guy and wanted to help doctors in San Ysidro dispense the medicine to childless couples? Or maybe his wife wants to conceive and he’s short on cash for a fertility clinic visit. Yeah, that’s probably it.

Because it most certainly wouldn’t be because the drug “helps restore production of testosterone lost in steroid users,” now would it? Actually, it would. And the man’s not ashamed to admit it. He loves what steroids have done to his body and his life. In this disturbing 2005 review of his book, Juiced, Bryan Curtis pretty much sums it up: the guy is bizarre. In fact, the more I read about him, the more my creepy meter jumps.

Can’t put my finger on why, exactly, other than quotes like this, perhaps:

Certain steroids, used in proper combinations, can cure certain diseases. Steroids will give you a better quality of life and also drastically slow down the aging process. I’m forty years old, but I look much younger.”

Well, rock on. I’m sure the WWE was happy to hear that. And Lyle Alzado might agree, too (but you know, we can’t ask him now).

Maybe it’s just that Jose doesn’t have a healthy self-image. He wants to make sure he retains his girlish figure. So, you know, he might someday look like the picture of natural beauty.

Yeah. Love me some weirdos.

PS – This just in. More weirdness, but not of the gross-out kind. Check out Math Chuckleheads from Forbes magazine. Heh.

…and all this time I was thinking that Joe wanted to be the 2nd man in history to actually get pregnant & give birth! (http://www.msnbc.msn.com/id/25519830/)

I get trashing Jose Canseco. In fact, I enjoy it. Do we really have to make fun of the WWE and their drug testing policy, though? It hits a little close to home, and makes my heart sad. Well… either my hearts sad, or it’s just deteriorating from these “vitamins” that Vince McMahon gave me…

That “picture of natural beauty” one… how is that even possible??

“I’m forty years old, but I look much younger.”

And he has the gonads of a five year old boy too, no doubt. Now THAT’s young looking.

Was that too far? I can never tell.

She called me “luv.” I feel all tingly.

What a wonderful role model this “prime athlete” has been… “Yeah, I did steroids. But it’s because he did it first!!” And then he points the written fingers at whomever. Why can’t the guy try to just say, “I did something bad. I’m sorry I did it. I don’t want any other young athletes out there to do it.” But no, I guess the testosterone flooded his brain back to childhood too.