OK, putting him in the above company is a stretch. All right, it’s ludicrous. But the fact remains: the guy made himself a gazillionaire by coming up with three game show ideas (among others) that made borderline voyeurism acceptable for the middle class, and introduced low-brow, bottom-feeder humor to American television. And now look…voyeurism and bottom-feeder humor are now among the defining benchmarks of American video entertainment. That’s sayin’ somethin’, folks. I’ll go one further and say that without Chuck Barris, we may not have intelligent TV classics such as Jackass, Southpark, and The Simpsons. Gems, all. But I digress. 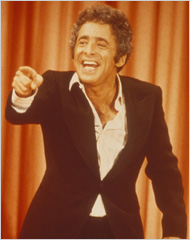 Barris created three of the most successful game shows of the 60s and 70s: The Dating Game, The Newlywed Game, and The Gong Show. Admittedly, I was a regular viewer of all three.

If you look at Gong Show highlights on YouTube, you’ll find that they are all pretty much unfunny now, although it sure looked like the “celebrity” judges (who the sam hill was “Jaye P. Morgan” anyway, really…) had fun watching those horrible acts and giving out the grand prize of $516.32 (no joke, that was 1st prize). Barris’s on-set behavior was so crazy, it left one Gong Show winner to wonder on his YouTube posting:

Heh. [Cute, although I did not find any references to drug use in any of my research.] 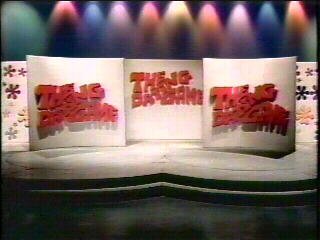 But there was definitely a method to Barris’s madness. He turned love into a TV commodity. In 1965, he launched The Dating Game, a live version of Mystery Date, where “three eligible bachelors” would answer questions from a girl on the other side of a partition. Based on their answers, the girl would choose one guy to take her on a date, which was arranged by the producers of the show. Cool, eh?

Sometimes, the questions were just a *bit* suggestive, although not anything too outlandish. But Barris took care of that problem with The Newlywed Game.

It was probably the first time the word “nooky” was said on network television. And it didn’t take a genius to figure out what they were talking about.

I wasn’t a big fan of the host, Bob Eubanks. He just looked and sounded smarmy to me. But not as smarmy as Barris himself later on, as he stumbled his way through the Gong Show tapings. I wonder how much of that he actually remembers, or if it was all an act, a la Dean Martin.

But that’s OK. We remember, and YouTube remembers. That oughta provide a lifetime’s worth of embarrassment for him. But all this doesn’t even scratch the surface of his penchant for the bizarre. His “unauthorized autobiography” (ooh that’s hilarious, Chucky baby), Confessions of a Dangerous Mind, secured his weirdsville status pretty much for life. From WikiPedia:

In his autobiography Confessions of a Dangerous Mind, originally published in 1984, Barris claimed to have worked for the Central Intelligence Agency (CIA) as an assassin in the 1960s and the 1970s. Barris tends to neither confirm nor deny this in interviews. A film adaptation of the book was made in 2002. Directed by George Clooney and starring Sam Rockwell, Confessions of a Dangerous Mind depicted Barris as being responsible for 33 killings. Barris wrote the sequel Bad Grass Never Dies in 2004. The CIA deny Barris ever worked for them in any capacity. After the release of the movie, CIA spokesman Paul Nowack said Barris’ assertions that he worked for the spy agency ‘[are] ridiculous. It’s absolutely not true.'”

I’m partial to Cecil Adams’s take on Barris, at The Straight Dope. Ha.

Gotta go to Starbucks…breakfast with the boss this morning. Yummy.