Bring back the days when cartoons were actually funny.

Don’t you find it odd that although children’s animated television programs have morphed into the tiresome, politically correct, good-always-wins-with-as-little-violence-as-possible cookie cutter format, our culture is more violent than ever? 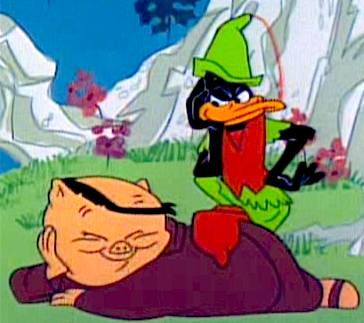 I mean, come on. Most of us who were raised on Warner Brothers/Merrie Melodies cartoons turned out all right, didn’t we? Honestly. What’s wrong with Daffy Duck repeatedly smashing into a tree while trying to impress Porky Pig with his Robin Hood-like skills?

I must admit, Daffy is my #1 favorite cartoon character of all time. Definitely one of genius Mel Blanc’s most offensive and obnoxious creations, Daffy would always get what was coming to him — and still come back for more. That was hilarious to me as a kid. Actually, it’s hilarious now, too.

What substitute is there for the spinning of the quarterstaff? [“Actually, it’s a buck-and-a-quarter quarterstaff, but I’m not tellin’ HIM that.”] “Ho! Haha! Guard! Turn! Parry! Dodge! Spin! Ha! Thrust!” *boing*…beak folds in half

Now friends….that’s comedy. And Daffy always got the best lines. 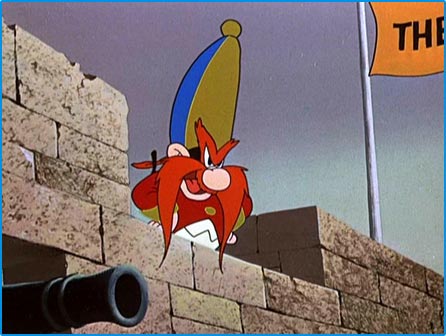 Ok, there may be *one* Blanc character more obnoxious than Daffy. That would be my husband’s favorite, the anger management poster boy: Yosemite Sam.

Now I ask you. What’s wrong with getting a little laughter from watching a six-gun-packin’ cowboy midget sociopath get thrown from the parapet of a castle — ten times?

Granted, these cartoons were not originally made for children. Rather, they served as warm-up, short features before the main movie was shown at theaters. It’s easy to tell that they were geared towards adults; many of the characters spoke lines, made gestures, and were even drawn by the animators to simulate modern-day celebrities, politicians, and cultural norms. But hey, we didn’t know that. We just thought they were funny.

Now we have Barney and Dora the Explorer. Not that there’s anything wrong with that. But geez, bring back some anvils dropping on Foghorn Leghorn, or Bugs Bunny and Daffy going at it: 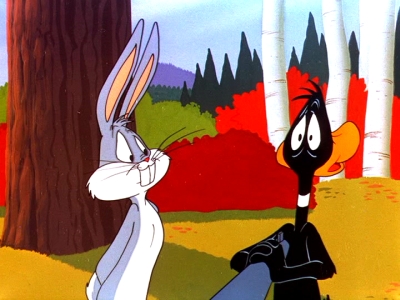