Hey, Fink here, coming to you from the lovely Crest Trail Lodge in Packwood, Washington — while the shaky wifi connection lasts.

To say that we have been on forestry and mountain overload would be an understatement. We have seen more gorgeousness in the last 48 hours than in the last 2 years, I think. To tell you about it all would take me the rest of the night, so I will try my best to hit the best and brightest parts without leaving out too much. 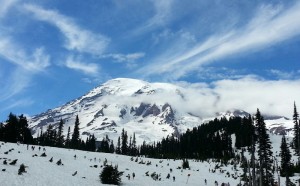 The summit of Mt. Rainier: the first of two incredible volcanoes we saw in as many days.

You just have to see this stuff in person to believe it, no kidding. The power of wind and water — and the restorative miracle of trees after a horrifying tragedy (the largest landslide in recorded history) — has knocked us out time and again over the last two days. It’s just a mind-blower, plain and simple.

Again, this is the shortened version. The many side-stops and trail treks we enjoyed made the experience even more amazing and special. Total “wow!” excursion, from the valleys near the entrance to the park, to the lakes that appeared out of nowhere at thousands of feet in elevation. 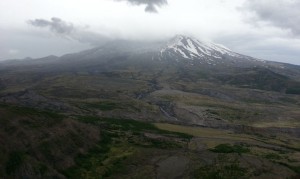 Do you remember where you were and what you were doing on 18 May, 1980? I don’t, probably because I was sick and pregnant, but I do remember watching in horror as reports of the climbing death toll from the MSH eruption took over the nightly news.

Look at the photo; see that green color? Those are huge Noble firs, standing at least 50 feet high. See the little silver thread in the middle of the picture? That’s a river. This is how enormous these areas are. It’s impossible to relay the size of them through photography. But back to the volcano.

To give you a comparison, here is a photo of how Mt. St. Helens looked before and after the 1980 eruption. Forest-farming corporation Weyerhaeuser lost tens of  thousands of trees on 63,000 acres in a matter of minutes.

The excited words of David Johnston, a young scientist stationed alone at the observatory six miles from the volcano — “Vancouver! Vancouver! This is it” — were heard over the radio, just before he was incinerated by the 300 MPH lateral blast.

Seeing films in the education center about the aftermath was hard to stomach. You don’t really think about those things, but there was an enormous human tragedy attached to the environmental one. Fortunately, huge leaps in detection technology (computer powered “spiders” now take over many of the data-gathering expeditions that used to put scientists in great danger on the mountain) have improved safety and the dependability of predicting eruptions.

Then there was the whole Harry Truman story. I was amazed all over again, remembering it.

So, after two days of hiking, driving, hiking, driving, shopping, photography and eating really well, we’re taking the night off and watching the season finale of Mad Men in our room. Lazy bums.

Hopefully, if tomorrow’s excursion to Seattle can be written about (I’m amazed I’m still typing this post), I’ll have more tales to tell, but this time it’ll be the big city instead of mountains and trees. Fine by me!

Hope you’ve had a great weekend. Check back here on Tuesday morning — I hope I’ll have more to show you. Petitioning the connectivity gods…