I know, you don’t. But check it out anyway. The Heisman events of late brought to my mind a situation that makes Reggie Bush’s “loss” pretty much laughable. 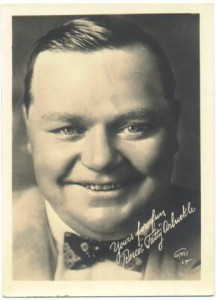 If you’ve never heard of Fatty Arbuckle, you’re probably not alone. His persona has basically been lost to history for decades. But boy, was he a contenda — until the wheels fell off and he was destroyed by innuendo and sensationalism.

In 1918, Roscoe “Fatty” Arbuckle became the first Hollywood actor to sign a contract for $1 million. His physical grace and athletic abilities despite his huge size were legendary. His contemporaries (Charlie Chaplin, Buster Keaton, and a very young Bob Hope, to name a few) admired him. The world was his oyster.

Then he went to a party in San Francisco over Labor Day in 1921. Several hours into the bash, a girl named Virginia Rappe ran screaming from a bedroom in the house. Four days later, she came down with an infection and died. Arbuckle was arrested and arraigned for rape and murder.

The rape was particularly brutal (I won’t go into the details here, but you can research it yourself to learn the nauseating facts), and many figured that the only person with the requisite size and strength to pull it off was Roscoe (his friends never called him “Fatty”). People assumed and figured, concocted and presupposed, and before long, Arbuckle was persona non grata in Hollywood. His career was over. There was just one little issue, however.

He endured not only the scorn of his erstwhile adoring public, but the systematic deconstruction of the career he’d spent years building through touring with burlesque and vaudeville companies. Close friends refused to believe he’d done such a horrible thing, but with the combination of an overly-ambitious prosecutor looking for reelection, and a maniacal publisher (Wm. Randolph Hearst) dying to sell newspapers, Arbuckle was doomed. It was the first time that a major movie star was involved in such a spectacular scandal, and everyone wanted their piece of the action.

It was also the first time in the history of American justice that a jury later issued a formal, written apology. Even though they acquitted Arbuckle (at his THIRD trial) for the crime and set him free, they knew his life was irreparably shattered. In their letter to him and to the public, they said in a desperate plea for people to forgive and forget:

Acquittal is not enough for Roscoe Arbuckle. We feel that a great injustice has been done him … there was not the slightest proof adduced to connect him in any way with the commission of a crime. He was manly throughout the case and told a straightforward story which we all believe. We wish him success and hope that the American people will take the judgment of fourteen men and women that Roscoe Arbuckle is entirely innocent and free from all blame.”

Too bad it didn’t work out that way. He never recovered from the scandal. He died in 1933.

So, it’s no wonder people like Reggie Bush are counting their blessings today, Heisman or no Heisman. It could have been a lot worse.

But hey, let’s end this on a positive note: BOOMR ARRIVES TONIGHT!!!

Great story, Finkster. Thanks for posting it!