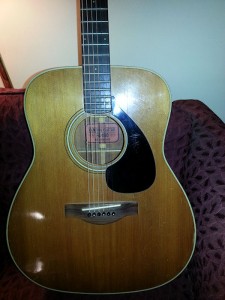 In 1970, my sister Mavis gave me an awesome gift — the Yamaha FG 180 “flat top” acoustic guitar that our parents bought and she no longer wanted. (I think her interests were redirecting to bigger and better areas, like, oh…boys

I immediately buried myself in my bedroom with it, along with a Mel Bay chord chart book and my record player. From that point until around high school graduation, those three items got an awful lot of use.

Over the last 42 years, it’s seen some interesting treatment: it was dropped on its head many times, spent a couple of years buried in a closet, survived several moves, played countless parties, school concerts, coffee house gigs and church services, and even went missing for a couple of months. We’ve seen some times together, this old thing and I. 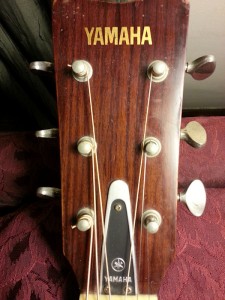 Unbeknownst to my parents at the time, they purchased a fine instrument, which now, four decades later, is in considerably high demand. According to my research, the sound is likened to the Martin D18 — no slouch comparison. The FG 180 was Yamaha’s attempt in the late 60s to enter the “Western guitar” market in the US — a time when record numbers of young people were learning to play acoustic guitar, inspired by the many country-and-western artists making it big.

As you can see by the photos, it’s been through several mills over the years. And true to the conduct of a rebellious pre-teenager of the time, it even has my initials carved in it. Ha.

When Daddy visited in September, he did some work on the neck, which made a huge difference. Last night, son Lars came over and restrung it and polished it up for his mama. It’s still an old soul, just like me. I guess that’s why I’ll never give it up.

I’ll just pass it down.

Hope you’re relaxing this weekend, fiends. I think I’ll play me some git-tar.

Sweeeet! Both of yas

I had a Yamaha acoustic in CA and sold it to make money to move here. I regret it deeply (even though I was a very very basic player, knew enough chords to sing with First Graders LOL).

Every first grade teacher needs a little Maria Von Trapp in her! Do you remember the model?

Go Lars! …and like a fine wine, both the geee-tar and you get better with age