The last word on Odyssey 2012 is beautiful. I’ve said it a hundred times in the past: there are so many magnificent places in the US to see and experience, you’d need a lifetime to do it all. We need to be grateful to the many preservationists and environmentalists, from Teddy Roosevelt on down, who recognized the importance of safeguarding public spaces against encroaching construction/destruction. What a joy it was to see enormous expanses of land, untouched by urban sprawl and commercial greed. 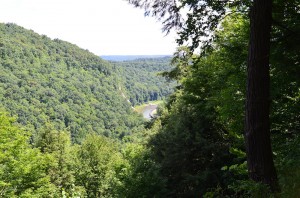 Letchworth State Park in western New York is a perfect example of this freedom from rampant over-development. Situated on 14,000 acres on the Genesee River in the middle of miles of lush, rural farmland, it is known as the “Grand Canyon of the East.” We’d never heard of it. The Thriller stumbled on it a few weeks ago while searching for hotels for the trek home. Why did we not know about this?

It’s roughly a 5-hour drive from our home here in Ohio, with beautiful views of Lake Erie along the way (if you take Route 5 in places, instead of Interstate 90) — totally doable for a long weekend, area fiends. You won’t regret it, guaranteed. 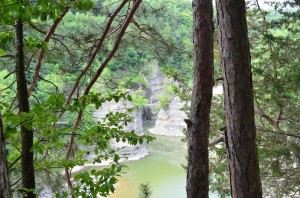 With dozens of waterfalls, a huge river gorge, trees, wildlife, hiking and biking paths, horseback riding, camping and likely scads of other activities I don’t know about, it’s truly a place for everyone. It’s also the first of what I’ve seen of a “carry in, carry out” public park. There are no trash barrels anywhere; what you bring in, you cart out. And I never saw a single piece of trash in a picnic area or on a trail.

We hiked as far as our achy bods would take us, uphill and down, to get some good photographs of the gorge and the waterfalls. After that, we just didn’t have it in us to go down (and then back up — it’s the “back up” part that stunk) the 127 steps to the natural footbridge. We’ll get ‘er next time. 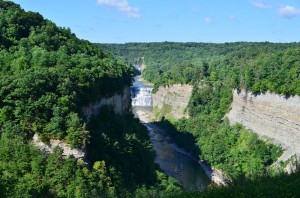 The absolute quiet grandeur of the place was overwhelming. Going on a Monday morning probably helped, too (after waiting for 20 minutes for a ranger to come to the fee station, we found out from some passerby locals that if you go before 9 a.m., admission is free), so the timing was perfect. We will definitely try to get back there again in the coming years.

And so it officially ends; Odyssey 2012 is in the books, and it’s good to be home. Odyssey 2013, you ask? Well now…we’re going to have some fun planning that one, now aren’t we?

Wow. Beautiful is definitely the word. You got some pretty awesome pictures, too. So happy that you both got to experience this!

I can’t wait for next years trek! You MUST let me know if you run into “Lestat” or ” Louis”.

Thanks, sis! And don’t think for a minute I’m not going to do the same creepy stalker thing with Anne Rice’s house that I did with SK’s. HA

And any Lestat/Louis sightings will be reported FORTHWITH

Talk to “da shop guy” about it! He’ll give you the low-down!

Of course! And as a bonus: our daughter-in-law went to Tulane, so she will undoubtedly have some inside knowledge as well.

So very beautiful. New Orleans sounds like it would be fun. I’m sure they have some kinda Anne Rice tour there. Are you planning the entire trip for just New Orleans or making other stops because if you take the direct route, you go right through Nashville. You’ll also go near Mammoth Cave National Park which is apparently really cool. I actually found a site recently that might interest you: http://www.roadsideamerica.com/ ReplyRat Fink Reply:July 10th, 2012 at 12:24 pmI love RoadsideAmerica! Go there all the time. In fact, that’s where we did a lot of our Route 66 research. Isn’t… Read more »

GORGEOUS! Thanks for sharing all those pics & stories along the way!!! Glad you have you both home safe & sound!!

Thanks, luv! We are glad to be home. Now don’t you leave for Greece soon??