Erm, that would be the Roman Numeral 30. Minds out the gutter, fiends. It’s Christmas Eve.

Yesterday was a blast. The Js came over for lunch and the afternoon. Jake was a busy man. He’d been making comments about a loose screw in a heating vent upstairs for quite awhile. He noticed it (and pointed it out to me) every time we’d come downstairs from bed or the potty. Well I asked him if he’d like to fix it, and he said, “Yeah!” So I got him one of Grandpa Thriller’s small screwdrivers, and off he went, doin’ work. 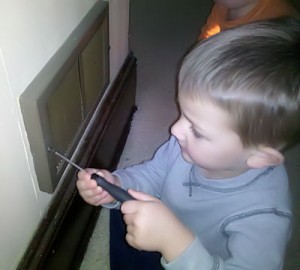 He had to run and tell Grandpa about it as soon as he got home from the store. There’s something about a three-year-old beaming after his grandfather says, “Wow, Jake, that’s great work! Thank you!” that gets me right here…

It was a rare day; both boys resisted the idea of naps. I’m a firm believer in naps, but also in the fact that sometimes, you’re just not tired. So Jake stayed up, but I ended up rocking Justin to sleep in his bedroom (for some reason, he preferred Grammie to his bed…no problem there). When I was sure he was out, I laid him on the floor. Behold the kid burrito: 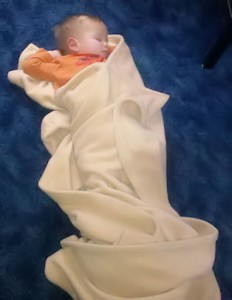 After Hannah picked up the boys, it was time to get ready for Thursday Night Dinner and Movie with BFF Kay & Bob — Christmas Edition. After dinner, we exchanged gifts. The Thriller got Rock ‘Em Sock ‘Em Robots. Thus began a time of two __-year-olds regressing to junior high: 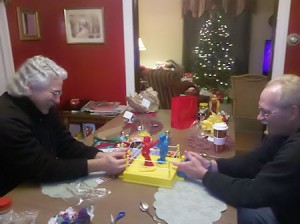 We watched Order of the Phoenix and ate cake and ice cream. It was a grand day and evening. And now we gear up for the pièce de résistance — Christmas with the Fink family. Can’t wait for tonight.

I feel a huge New Year’s resolution coming…ugh. Fly me over the Super Bowl.

It was a grand time all around & Jake is a great helper! Just goes ta show ya how far a few kind words can go…just sayin’. Merry Christmas!

OH! Roman numberuls!! I member them! Actually I thought you were going to go off on various & sundry Vin Diesel trivia (http://www.imdb.com/title/tt0295701/)

MERRY CHRISTMAS to my bestest favorite Ashland peeps!! Hope you have a great day with family tomorrow! ((HUGS)) xoxoxoxo

Ah, the shoot-em-up, blow-em-up movies…those are down the Thriller’s alley!