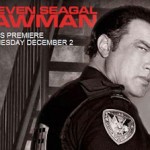 Good grief. Has anyone ever seen this man smile? I wonder if he has ever cracked a grin in his long-legged life. Now we can see him in his own reality show (hey, there’s a new idea), chasing down the bad guys in NOLA. Actually, it appears that he is doing good things with his avocation, while nursing his acting career back to health.

But sheesh, can we see some teeth once in awhile, Grumpy McFrownyman? Lawd. 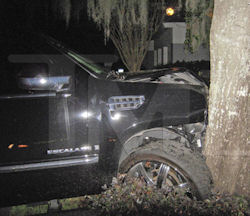 And then there’s the whole Tiger Woods thing. I have mixed opinions. Sure, he doesn’t have to tell anyone what really happened the other night, when he crashed his car into a fire hydrant and then into his neighbor’s tree, and his wife reportedly smashed out the back window of his Caddy SUV with a golf club (Seriously…have you ever seen someone do that? It doesn’t work like the candy glass shatterfests that happen in the movies and on TV.), and heroically dragged her husband through the hole. Okaaaaaaaay….

I’m all for keeping one’s business to oneself, and I agree that everyone should mind their own happenings in their own driveways and stop worrying about everyone else’s. But I have to also agree with Mike Lupica of the Daily News when he said, “[Y]ou either get out in front of your own story, or it takes off without you, like an out-of-control SUV.” This puts Woods in a precarious position: own up, or let the goss fly. It’s the downside of being the most famous working athlete in the world (sorry, LeBron).

That said, it’ll all blow over eventually (several actors, pro athletes and politicians come to mind), and he’ll likely be forgiven. However, people tend to forgive honest confessions of wrongdoing (not saying there was any wrongdoing, mind) much more readily than protracted holdouts that ultimately reveal the truth anyway. The media people are too good at what they do. I think the story will come out. In fact, tongues are already wagging.

Would it bother you if I said that, although I’m not a day-counter normally (I actually abhor the practice), there are only 13 more days of school till Christmas break?

Fink, draggin’ it to the Cavs game tonight