So I read an interesting article in the Wall Street Journal yesterday — about football helmets, of all things. Honestly, I never thought about it that way. Have a looksee.

I guess we don’t think a lot about what happens years after football or other overly-violent sports. You can see it in high-profile boxers like Muhammad Ali. Although you can’t say what caused his Parkinson’s or any other ailment, being constantly bashed in the head for years on end can’t have helped. It’s sad to watch.

What price glory and fame? I remember going to Ohio Stadium years ago for a band festival. A guy who once played for OSU (and later the NFL) was there to present an award. Can’t remember his name, but he had retired years before. Anyway, we were sickened as we watched him walk out onto the field to the microphone. While not more than 45 or 50 years old, the man could barely move; he walked with a cane. Someone told me his knees were full of bolts. Eww. We all felt bad for him at the time.

Is it all worth it? Seven-to-ten on the field, and the rest of your life on crutches? I have to admit I love watching football, but I really do cringe at the punishing hits I see these guys take. And again, I never thought about them delivering even more violent hits thinking they’re ultra-protected by more gear. The future will tell, no? 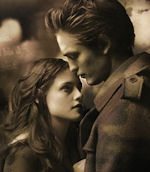 So, question for ya. Who flipping CARES if Robert Pattinson and Kristen Stewart are holding hands? Apparently, millions. The hysteria surrounding New Moon is starting to bother me. Get off the screaming 14-year-old-girl-on-a-roller-coaster thing. I really did like the books, and the first movie was well done, I thought. Now people are ruining it for me; it’s embarrassing to watch them fawn and faint and scream. I mean, really. Just because I devote entire posts to Johnny Depp and surround myself with Fabs memorabilia doesn’t mean I’m addicted or weird or obsessed. I can quit anytime I want. So get over it, Moon-ies. Move along.

Thunderbirds are go. Have a goody.