Down AND out
For the first time since July 4th weekend, the Cleveland Indians won two games in a row. Let’s bow our heads for a moment of thanks. Last place in the division, worst record in the American League — you’d think something would have to give.

Suffice it to say that there are just a few problems over at E. 9th and Carnegie. I hate it when people are really, really right.

Ah well. At least we have the Browns season to look forward to. That, and there’s always next year. Heh.

So in brighter news, the Thriller and I are taking off tomorrow for a much-needed getaway for some fun at Greektown in Detroit. He got two free nights in their brand-new hotel, and a bunch of free food. Free food is good. Anyway, we leave tomorrow and will be back sometime Monday night or Tuesday. Should be fun. 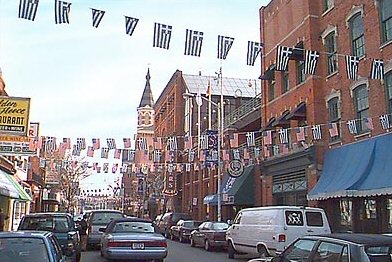 I like Greektown because of its location: dropped right in the center of, well, Greektown. There is a wonderful ethnic/historic feel to the street outside the casino building. In the days when we used to park in a nearby garage and walk to the casino, the area was filled with the sound of Greek music (piped out into the street by huge speakers mounted somewhere above your head), and smells of what I am certain was all manner of exotic Greek cuisine from restaurants with names like Pegasus, Laikon, Plakas and Parthenon.

And there is no shortage of Olympic opulence in the hotel. The lobby is a knockout all by itself.

So here’s to a happy weekend for all of yous. I’ma go make coffee.

Enjoy! Have a great week-end! Have a cool week-end. It was 92 here yesterday and 105 on our screened in front porch.

I stopped being emotionally invested in the Tribe a while ago. No need to support a team that isn’t willing to spend the money that is needed to win championships. With the Dollens, it’s not about winning, it’s about making money. Who knows though, maybe once Shapairo and Wedge get canned maybe they can turn things around enough to win possibly even three games in a row next season.

In 1989 I lived in Elmira, NY; a sleepy little place on the border of PA. Mark Twain’s wife was from there, but other than that it was/is pretty nondescript. I lived 3 blocks from Dunn field, where the Elmira Pioneers, then a farm team for the Red Sox, played during the summer. I was particularly impressed by a certain catcher, and one day after the game, I asked him to sign my cap. I always hoped he would make good, because he called a good game and was a good hitter, too. I still have that cap, and you… Read more »

Yes, actually. I thought that boy was going places. But apparently he went to a different place than the ones I had in mind. Too bad. That cap would be worth something today, wouldn’t it?