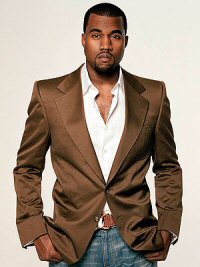 Whoa, I slept in until 6:25! Half the day’s gone now. OK, what’s in my reptilian brain this morning? I have six tabs open in Firefox. What’ll it be? Ahh….

Kanye West. I remember the first time I heard the Auto-Tune vocal processor on a recording. It was ten years ago (I looked it up), on Cher’s “Do You Believe in Life After Love?” Kind of a cool effect.

This morning, I listened to four tracks from West’s new album, Heartless. I kept listening, thinking, “OK, there’s got to be an end to this effect; he’s going to revert to his real voice any second now.” Nothin’ doin’. There isn’t a single moment of those four songs when Auto-Tune is not (over)used.

For those who may not know, Auto-Tune is a device used in recording studios (and increasingly in live performances) to alter a voice. It corrects bad notes so it sounds as if the artist sang in tune. Engineers can also monkey with Auto-Tune to give a voice a robotic sound.

As with every other in-studio sweetening gimmick (delay, reverb, phase shift, doubling, and a hundred other effects I don’t know about), Auto-Tune should be used like salt; a little bit goes a long way. Too much of it and the whole dish is ruined. And so it went with my four-course Kanye meal. It is apparent that the boy can’t sing in tune, but at least has the wisdom to use technology to cover up the fact. Unfortunately, the “annoying” factor still comes through loud and clear.

“Paranoid” has a nice hook in the chorus, but cripes I can’t get away from the Auto-Tune that I know is coming on the next line and the next and the next. And regarding “Amazing” — props to Mr. West for being a mega-hitmaker, but son, it sounds like a couple of my middle school boys experimenting with a 4-track recorder and a sampler in their attic. The singing is so bad, not even Auto-Tune does a decent job of covering it up.

The lyrics weren’t especially ennobling, either:

But hey, to each his own, right? If the music speaks to you, it’s all good, because in my book, that’s what music is supposed to do. And here ends my foray into popular music criticism — an endeavor best left to those who know the business. But seriously, anyone can recognize delusions of grandeur/self-aggrandizement when they see it. Brother needs to be careful. It’s all fun & games, painting yourself as bigger than life and greater than everyone and everything, until you can’t back it up. Heartless didn’t help Kanye’s quest for world domination.