I’m not sure it’s so unbelievable anymore. The money just keeps rolling in for these guys. I guess I’m just jealous. Money can’t buy me love, right? I know. But I’d sure like to see what else it could buy me. Anyway, I digress. 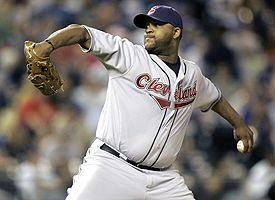 Former Cleveland Indians pitcher C. C. “Baby Huey” Sabathia is going to be given $9.5 million — not for pitching for the New York Yankees, mind, but for simply saying “yes” to pitching for them.

On top of that, he gets a $14 million salary in 2009 and $23 million in each of the final six seasons of the deal. He wins the prize (for today, at least) for the largest contract ever for a major league pitcher. Nice.

Hand it to him, though. He did admit that “with the economy being the way it is … the huge amount of money, it was, you know, pretty crazy. But that’s our game, I guess.”

Well at least he was properly humble. 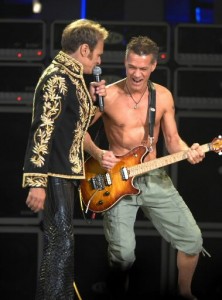 Van Halen, yikes. David Lee Roth and Eddie Van Halen don’t look anything like they used to. But who among us does, right? *sigh*

Still doesn’t change the fact that they look like accountants playing Rock Band on Saturday night.

I remember a story my boss told me years ago, when I worked in the student activities office at a local university, where I was in charge of processing the contracts for the big-name acts the college booked. He said that Van Halen had a rider in their contract that demanded a large bowl of M & Ms be provided for the band backstage — but with all brown ones removed.

I always thought that was funny. I mean, they were definitely bad boys — bigtime party horses. But was someone in the band so paranoid about the color brown that concert organizers would need to go to such lengths? I didn’t believe it. But…turns out it’s true — sorta.

Finally, PK sent me this link yesterday and I laughed. I think we can categorize this one as just “unbelievable.” Especially when you read the “testimonials.” HA

Hey, you have a nice Sunday. What are you up to today? For me: studying, maybe a little choreography, and watching the Browns and Bengals play for what little pride they have left. Yeesh. At least the Cavs are winning, for now.

5 thoughts on “Unbelievable, but true”