Why can’t I do it? I’ve tried several times. At twitter.com, I’ve gotten as far as this: 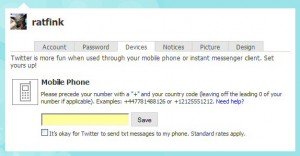 And that’s as far as I go. Can’t give up the cell phone number. Why is this? Why do I distrust any “free” online service wanting my mobile number?

For those who may not know (or care), Twitter is an insanely popular application whereby you post little personal updates about what you’re doing/thinking/feeling at the moment — and I do mean “little,” as you’re only allowed 140 total characters to say your piece. Anyway, the Twitter folks say that it’s more fun to use on your phone, because you’re not always at your desk when cool/amazing/infuriating/random stuff happens. So they want you to give them your mobile number so you can post directly to your Twitter profile from anywhere.

According to the official Twitter Directory, there are over 2 million users worldwide. That’s a lotta web posts and text messages, friends. And I’m no hand-wringing scaredy-cat when it comes to doing things on the web; it’s just that my cell phone is one of the last bastions of basically spam- and hassle-free communication devices that I own. [Has anyone used their cell number on Twitter and lived to tell the tale? If so, post a comment here.]

Still — I can see how Twitter can become addictive. I only have one person on my “follow” list (meaning the list of people whose Twitter updates I signed on to see), and going back over his posts, it’s quite interesting to look at some random stuff that’s happened in his life. But where does all this lead? Glasshoppa have many questions.

I remember reading a blog several months ago (wish I’d bookmarked it) from a guy in Japan, I think, who suspected that it was only a matter of time before Twitter’s business model was picked up by competitors, and then we’d have this mass glut of posts and text messages on the web from people saying that they saw a guy on the street walking a three-legged dog, or that there is a mad sale on socks at Macy’s, or that you’re sitting in a rehearsal and you hate your director (which never happens, I’m sure). In the big scheme of life, where will this huge archive of snippets fit? If I remember correctly, the guy said that maybe it could serve as a time capsule of sorts; your grandchildren can read about the day in 2008 when the drive-up lane at the bank closed just as it was going to be your turn. Or whatever.

So my point, and I do have one, is that I think an experiment is prudent at this juncture. For the next 12 months, I will post to my Twitter page on a semi-regular basis (though I’m still not sure I will post from my cell phone). I encourage you to “follow” me, if you like. And I’ll do the same with you. And feel free to respond to my “tweets” as well. If nothing else, it will hone your skills at saying what you want to say in 140 characters or less.

On 3 July, 2009, I will post my reactions and any data I’ve collected. Sounds positively twittillating. So do join me in the experiment, if you like.

But you have to get an account first, so stop reading this drivel and get on it, pard.