I’ve often told my fiends here at RtB that I don’t know how I end up at this site or that article; I just end up there. I’ve never taken the time to retrace my “steps” to see how I arrived at a certain topic. So this morning, I tracked my progress from simple eye-catching article to final decision for today’s post. Behold, the yellow brick road:

Et voilà. Today’s Finkness. Now wasn’t that easy? I perform this ritual almost every morning, and I must say I enjoy it immensely. I read and read and read (which I enjoy anyhow), then I happen upon something that causes a random thought or triggers a memory. And away we go.

Speaking of getting going: 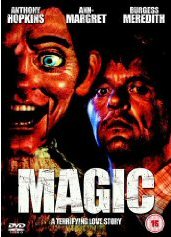 Do you remember this movie? I saw it in the theater back in 1978. It featured Anthony Hopkins as a lonely, moody, morose magician named Corky, who doubled as a ventriloquist for Fats, his totally creep-tastic looking dummy.

Well, turns out, Fats was no dummy. Fats was just evil, but in an internal, much more sinister way. In other words, Fats was Corky. Fun With Psychosis, yay.

And although I haven’t seen the film since that night in ’78, I do remember that it wasn’t a jump-out-and-go-BOO-type movie. Rather, you scared yourself to death. Imagination is funny…

Maybe seeing it now would make me laugh. I do remember Burgess Meredith’s crookedly amusing line to Corky, telling him that he (Corky) could convince Meredith of his sanity if only Corky could “make Fats shut up for 5 minutes.” Of course, Meredith’s character knew Fats would not shut up once he took over Corky’s half of the personality. I remember being a bit creeped out by the whole thing.

Some dummies are funny, though. I know everyone’s familiar with Jeff Dunham’s Achmed, the Dead Terrorist and his other characters. But seriously, catch yourself some vintage Wayland and Madame sometime. Wayland Flowers, who died of AIDS complications in 1988 at only 48 years old, was not a ventriloquist; he just held Madame off to the side and spoke without the deadmouth shtick. But truly, you hardly noticed Wayland — Madame wouldn’t allow it. They were both brilliant.

Just so you know: there is a rant coming…very soon. Heh.