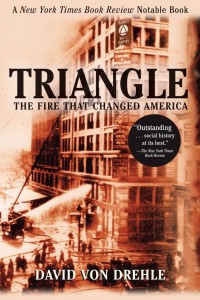 I read to escape.

My job brings me no small level of worry and stress some days, and if I couldn’t turn to some healthy method of decompression come bedtime, I’d sleep even less than I do now. So I look forward to my routine announcement to the Thriller: Night, hun. I’m going up to read.

Occasionally, I step off my predominantly fiction-oriented path to take in a biography or historical account. For the last several weeks, I’ve spent 20 minutes a night with David Von Drehle’s Triangle: The Fire That Changed America. Undoubtedly, some New York observers of the horrific events of September 11, 2001, when victims with no other option leapt out of windows to their deaths, couldn’t help but be reminded of the worst workplace disaster in American history (prior to 9/11). 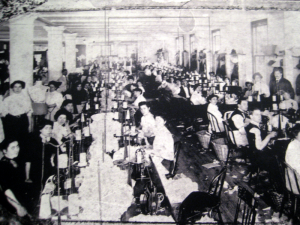 Typical day at the Triangle

Eyewitness accounts of the March 25, 1911 Triangle Shirtwaist Company fire feature a wide range of images, emblazoned in the memory banks of those who were unfortunate enough to have watched the tragedy unfold in an ill-conceived, overcrowded, poorly ventilated, stifling 8th-floor-and-above women’s blouse factory death trap, staffed mostly by immigrant girls who worked 52-hour weeks. Once the lit cigarette was accidentally thrown into an under-table fabric bin, fates were sealed. Twenty-five minutes later, the factory lay in ruins, and 142 people were either dead or would die later in Manhattan hospitals. The ways in which many of the workers perished does not make for drowsy nighttime reading. 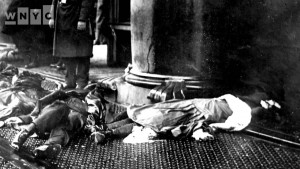 One witness said, “It was raining bodies.”

Girls by the dozens fell — or were dropped by male workers, who then followed them — onto the pavement, from eight and nine floors up. One observer remarked that it was an eerily quiet scene, disrupted only by the sirens and occasional shouts of Don’t jump! from those looking up in horror from the street. Systematically and silently they fell, choosing instant death over the agonizing torture of slowly asphyxiating on the smoke, or worse, being burned alive. Others saw police and firemen having to stop to remove corpses from the sidewalks so rescuers could get to the building.

It was a perfect storm of disasters: 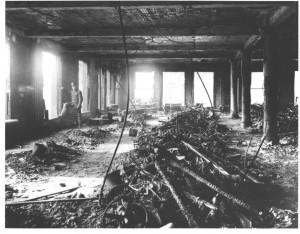 The aftermath included no shortage of demands that workplace safety be a city priority, and that labor unions be given the respect they deserved. (The organized labor aspect of this tragedy is another post altogether.) Indeed, the Triangle fire not only influenced large-scale changes in building codes and union law, but also played a part in the changing face of American politics, from the corruption of Tammany Hall to the inception of FDR’s New Deal.

What struck me most about the book, however, is how horribly these immigrant workers were treated. The great bulk of New York’s clothing industry was kept afloat on the backs of underpaid, overworked young people from Russia and Italy, who barely scraped enough wages together to pay for a bed in a filthy tenement house where there were four and five people per room. Many scrimped and went without so they could send money back home to their families. I can’t imagine the joyless life they led, while their immediate superiors dined out every night and were driven about in limousines.

It’s a good read, though, in that I have learned much about the history of labor relations in the US, and for this teacher union president, the information was timely and appreciated. However, for nighttime relaxation reading? I think I’ll go back to Stephen King.

Fink, back to the couch with the DayQuil and electric blanket

Great review, sounds horrifically tragic which for most would preclude it from a night time reading list…not very relaxing at all.
Reading is my chosen form of sleep aide as well; for Liz it is music.
Enjoyed this very much…. Peace!

Thanks, Dave! You might find this a bit silly, but I *cannot* have music playing while studying, reading, relaxing, whatever. I think it’s because I purposely pay so much attention to it (even while watching a movie — the soundtrack is always at the forefront of my concentration) on a regular basis, I can’t switch it to “background” very easily. I’d be awake listening to it all night, lol

I can’t imagine a life without books, ja?