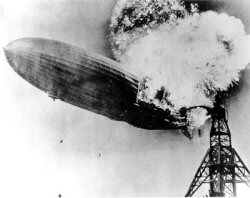 I was always under the impression that the volatile properties of the hydrogen used for fueling the giant dirigible Hindenburg caused its terrible fate on 6 May, 1937.

The real cause of the fire and explosion was not the hydrogen (which did burn moments later), but rather a static-electric spark hitting the fabric skin of the ship, and the fabric happened to be coated with paint containing two chemicals found in rocket fuel.

Hmm. This I did not know.

In fact, according to the “Hindenburg Myth” at the Rocky Mountain Institute website:

The clean hydrogen flames swirled above the occupants of the passenger compartment, and all those who rode the airship down to the ground survived. 35 of the 37 casualties perished from jumping to the ground, and most other injuries resulted from diesel burns.”

You might be wondering (as I sometimes do myself) how I arrived at today’s topic. Last night, I watched World News Tonight on ABC — first time I’d had television on in a long, long time. During one of the commercial breaks, BP Capital Management CEO and multi-gazillionaire T. Boone Pickens came on. I thought he was stumping for McCain or something, but no: he bought 2 minutes of network time to drop bait for his Pickens Plan, designed to steer the US over the next ten years to fuel its cars with natural gas, and use wind power for electricity.

Anyway, that’s where I linked to the page about hydrogen myths. And there was the article about the Hindenburg.