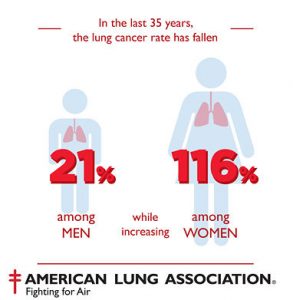 November is Lung Cancer Awareness Month. Give anything you can to research — help them find the answers.

I didn’t know what to call this entry today — maybe when I think of a title, I’ll put one in. Until then, I’ll just rip off an idea from Broadway.

I’ve waited since last Monday to write, because I wanted to see how the radiation treatment went. According to my impromptu interview this morning, he does feel some better from it. He was able to get some good quasi-coughs in, and one evening this week he even cranked his bed down flat to sleep! Granted, he said, he lay on his side, but it’s still a victory, as he hasn’t been able to lie flat for months.

Our local Hospice representatives came over on Thursday, and we had a nice talk. We learned a lot about what they offer, and liked what we heard. I don’t know why I didn’t know this, or how I didn’t just figure it out, but Hospice is an “either-or” venture; you don’t get to go to the hospital for anything unless you revoke Hospice care.  Of course, the Thriller, ever the inquisitive wisenheimer, asked, “If I can’t go to the hospital for anything, what if I fall and break my leg?” Legit question, I say. (The answer is that of course you can go to the hospital then, but Hospice will meet us there and temporarily revoke their coverage so the hospital can bill my insurance.)

He decided to go with Hospice mostly because of the alternative: very harsh chemotherapy, which would likely end up making him extremely sick, and probably land him back in the hospital — a place he never wants to see again. I was — and remain — completely behind him on his decision.

Some would say that Hospice means we’re giving up or in. It doesn’t. As we’ve discussed on many occasions, cancer is the obeyer of no rule. It doesn’t adhere to statistics if it doesn’t want to. How many cases have you heard about where the terminally ill patient goes to the doctor because he has no more symptoms, only to find that the cancer is inexplicably gone? No, we’re not giving up; we’re staying the course for the miracle. Why can’t it happen to the Thriller?

I must confess that I’m glad we’re done with the treatments and scans and appointments and waiting and driving and his discomfort with riding cooped up in a car and all the stress. I will miss Dr. Velcheti and his staff, though. They were very good to us, and the frustration over the fact that the drugs didn’t do their job was evident on the doctor’s face at our last visit. They’re good people up there, and if this demon ever visits your lungs, I recommend Velcheti without reservation.

So, we turn down a new path as of noon today, when the final signing of Hospice papers takes place. The Thriller wants to be home, and we all want him at home. No more needles and bruises; just hugs and kisses and partying. 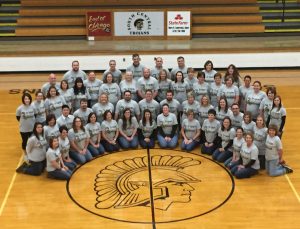 I will also say at this point that the outpouring of love and expressions of encouragement through prayer, gifts, meals and text check-ins has been nothing short of overwhelming. I don’t think my boss would mind if I posted this photo from yesterday, when the staff at my school purchased t-shirts with the logo “No Trojan Fights Alone” in support of Michael and our friend Stoney, who is also fighting a cancer battle.

A hug at a rehearsal or in the hallway or teacher lounge, a note in my mailbox, an email or text, a card in the mail…all those expressions mean so much, and to everyone, I promise we will pay this forward.

Next on the menu for us? A trip to the casino for some fun, as soon as he’s feeling up to it. Until then, we thank all of you again, so much, for holding us up in thought and prayer during this journey. It ain’t over yet.

I’m thankful for the angels of hospice and am a firm believer in miracles. And certainly, why not Thriller? Praying for that for you all and in the meantime, comfort, peace and wonderful, memorable parties. Love.

Jax…I will keep praying for you on this journey! Love to you and your family!

I would and will make the same decision…Home is where we belong.
Every morning when I look in the mirror at this mug of mine I see the insidious smile of cancer staring at me through my scar. Looking somewhat like a stand-in for Young Frankenstein I realize that this stuff is an “every minute fight” till we no longing can.
Praying, pleading on your behalf daily…I know you two will battle till there is no more. Thriller will do that all the while smiling…what a man you are mi Hermano!
Anything…it’s yours…In so?!

Congratulations to both of you on your decision, and kudos for your continued bravery and fortitude. Sending much love and healing energy.
PK
<3

The Trojans in shirts and on their knees turned my tears into a bawl. I am so thrilled that you and Lisa have this community of care givers [which is what teachers are] to give hugs, chocolates and love. I know that I felt horribly alone while guiding my mother on her next journey so I know how much embrace of community can keep you from drowning.

Thank you everyone. I love you all.

Hospice is a gift. Prior to mom’s experience with them I thought they were death beds – which couldn’t be farther from the truth. They are all about living. Enjoy the hugs, kisses, and parting – you’ll have so much more time and energy for that without traveling for doctor visits and treatments.

Soaking up the wonder of the love you share and sending healing your way. Big hugs. #TeamThriller

A person can only do so much when cancer comes into their lives, you both need to enjoy each other without the stress of how a treatment is going to interfere. I have experienced Hospice in my family out of Mansfield and they were wonderful ! It not only gave my mom a break as my Dad wanted to be at home in his own house that he built but I learned so much more like you say , its just not the end but the beginning of something to experience. Prayers to you both for strength, healing and living… Read more »

As always, you both are in my prayers. Miracles happen every day so indeed, why not for you two. Peace and comfort to all of you.

Hospice has indeed been a gift! I’ve learned so much over the last week, holy cats. What a bunch of great people they are. They want to accommodate his every need, and they make us both feel so special. Big hearts on those folks.

And I agree — why not the Thriller for a miracle? We refuse to give up hope.

Thanks again everyone — you’re the best!