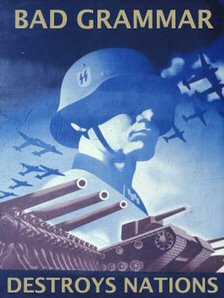 It really does, you know.
I think it bears repeating. Whatever the reasons (internet shorthand habits, fewer spelling and usage tests after elementary school resulting in less attention paid to grammar, general apathy, overwhelmed teachers trying to keep up with NCLB, standardized testing that’s anything but standard), Americans continue to butcher their language.

Sometimes I want to give up the fight. Yesterday, three of my middle school students used the word “brung.” Cripes.

I’ve been told I’m too picky about grammar, that nobody cares anyway, and that my grammar peeves are probably outdated. For instance, I insist on saying “thee end” instead of “thuh end.” I hate the question, “Where is it AT?”

[I will say that I have loosened up a bit in my advancing age. Thirty-five years ago, I would have never begun a sentence with “and” or “but,” or written in a style that incorporates the occasional sentence fragment. I do both all the time now. But I digress. And I am good at digression.]

I hate it that some of my students think their poor spelling skills are funny, and that they have no trouble at all saying with a smile, “I can’t write” — followed by a shoulder shrug.

Or they say, “Hey, we’re from (insert small Ohio community here),” as if to say (sing), “Folks’re dumb where I come from — they ain’t had any learnin’…”

It makes me sad. And the problem is not limited to the nation’s youth; it knows no age, social class, or (unfortunately) level of education. Years ago, I worked as a secretary to a university official. I would secretly correct his horrible grammar and countless spelling errors as I typed his correspondence. I had a high school education; he had two graduate degrees. Go figure.

Still, I am compelled to do my part — however inconsequential — to promote safe and healthy written and oral communication in my little corner of the world. I shall press on.

Grammar is one of the most important things that employers look for when going through job hirings. Being “well-spoken” can go a long way in life. Those that feel they don’t need to use better grammar should really improve everything else about them if they plan on succeeding in getting a decent job.

Ha. I feel your pain, Jax. I get pretty annoying sometimes around my friends, I’m told. Ask Sofie – she doesn’t understand all the grammar rules of English, so she’s always using were and was in the wrong ways. Her mistake was actually telling me to correct her grammar. She can get some pretty evil glares going.

The constant use of “like” is sort of annoying, too… but I’ve been sucked into that. *sigh* Have a nice weekend, anyway!

I hate ‘where are you at?’ as much as anyone (blame the insecurity of cell phones- that was never something you asked someone on a land line), yet while it may be unattractive grammar, I’m not so sure it’s a violation. I was an intern for the Clinton administration back in the day and one of the writers had written a proclamation for some event or other and he ended a sentence with a preposition. It set off a search for why this was wrong, and I think that we discovered that in Latin it was indeed wrong, but in… Read more »

Yep Ross, that goes along with my statement about loosening up a bit in my old age. For instance, I have no problem with asking, “What is the movie about?” or “Where’d that come from?” I think it’s the redundancy of “Where are you at?” that makes me cringe as opposed to ending a sentence in a preposition — something I was told I must never do. Several words and phrases have, over time, become an accepted part of the English vocabulary simply by virtue of their repeated misuse (“alot” comes to mind). Some don’t bother me at all, while… Read more »

The internship was half-way through his first term, so I still felt the excitement he brought but was also there when Gingrich and the Republicans swept into Congress. Truthfully I didn’t do much; the White House has some 200 interns per quarter, and none are given any real responsibility. The office I was part of was called Presidential Letters and Proclamations, and we worked with Scheduling and Advance- if a group requested Clinton’s presence at their event and the request was declined, we put together a proclamation to be read at the event. The most interesting part of the internship… Read more »