Happy 2-hour delay, fiends. I’m beginning to hate them, however. It’s like having your mother-in-law come stay for the weekend. It’s nice the first few times, but by the twentieth, well…

So I was going to do a post I’d promised to do awhile ago on women who were “still fabulous after 40,” in answer to the one I did about men back in November. I got sidetracked.

In my searches, I found a hilarious condition identified as Madamism. You remember Madame, the sassy, snarky puppet operated by Wayland Flowers back in the 70s and 80s? I thought the whole act was hilarious.

Anyway, it seems that some Hollyweird actresses have had so much plastic surgery that their faces, over time, begin to resemble our lovely Madame. 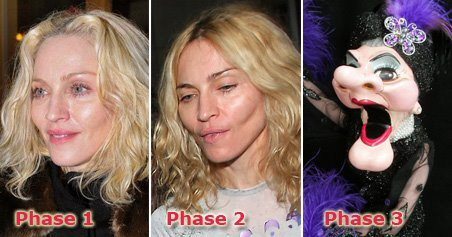 All right, now you have to admit it: it’s funny. Maybe I won’t think it’s so funny ten years from now, but for today, ha-ha.

I think the puppet is much more attractive than Madonna. In my opinion the best story of 2008 is Guy Richie taking half her money. It’s like Robin Hood, except in this case he stole from untalented-past-her-prime “pop star”, and gave to the popular, talented, English director.

You know, Kody…I’m embarrassed to look at her scary skinniness. Obviously, she thinks it’s sexy, and maybe to some, the skeletal arms and legs with chicken-bone meat on them is attractive…but not to this girl. Not that skinniness is bad, mind — I think it’s preferable to being heavy — and I am all for feeling, looking and acting young. Believe me, I am fighting middle age’s downside with all I’m worth. However, there are just things a 50-year-old woman doesn’t do (in my opinion). And those things include dancing onstage with, how shall we say it…one’s knees pointing east… Read more »