All the news that’s fit to roll your eyes at. (Yes, I ended a sentence in a preposition. On purpose. There, I wrote a fragment, too.)

While perusing the news this morning, I found the following gems: 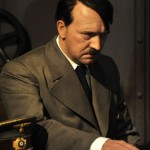 Last Saturday, a brand-new Madame Tussaud’s Wax Museum opened in Berlin. It wasn’t open but a few minutes when some guy, reportedly on a dare from his friends, came in and ripped off the head of the statue of A***f H***er. HA. Ach! Mein Kopf! Wackjob.

Apparently, the museum staff is now considering what they’re going to do with the $329,000 decapitated statue. But really, was it of national importance to put him in there in the first place? In Berlin, of all places, just a hop and skip from his old bunker? I mean, I’m all for accurately representing a nation’s history, warts and all, but this is just askin’ for it. Not that they were glorifying him, mind. It shows him quite possibly contemplating his impending doom at the hands of the Allies in 1945. (Click on the photo for a super-size view.) 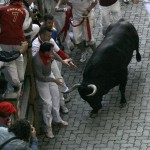 It’s the running of the bulls again, and people are still dumm. And do these things creep you out? They’re part of the Pamplona celebration as well. They are put in the parade as a tribute to Saint Fermin, who, apparently, has the ignominious task of “protecting the runners.” Shyeah.

Anyway, the faces. They kind of remind me of the dreaded Muffler Men.

News from the city of my birth, Zion, Illinois. The Russell Military Museum (actually located in my mother’s hometown of Russell, but it’s really just a patch of road and farms) is having a demonstration of a Sherman tank crushing a car. How about that.

And speaking of bizarre…

Gnarls Barkley performed at the Montreaux Jazz Festival last week. [Huh?] Maybe Montreaux just wants to be more accepting; embrace an artistic world view, you know. Or, the hardcore jazz fan base must not be selling enough tickets anymore, which means the organizers needed a way to inject some cash flow into the event. Paul Simon (whom I adore, but jazz? I can see him dabbling in some world music, which would fit, but still…) was also there, as was Vampire Weekend. Go figure.

Ok, off to get stuff together for Heather’s birthday feast tonight. A good time indeed.