Ok, fiends. Lately, I’ve been reading Philippa Gregory’s series on the wives of Henry VIII, king of England from 1509-1547. I’ve never been much of a fan of historical fiction, but I’m enjoying these books a lot. 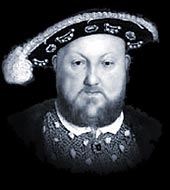 How much do you know about Henry Tudor, besides the fact that he had six wives? Here are some Fun Facts for your perusal:

Item: He wanted to divorce Catherine of Aragon (his first wife) so he could marry Anne Boleyn. The Pope said nothin’ doin’, so Henry simply broke ties with Rome and appointed himself head of the Church in England so he could have his way. Nice.

Item: Henry was a germophobe, and with good cause. “The sweat,” a flu that killed tens of thousands, scared the willies out of him, so he constantly went “on progress” from one castle to another during the hot summer months, trying to outrun the sickness. He succeeded.

Item: He is depicted as a bloated, nasty curmudgeon, gnawing on a big ol’ turkey leg, ordering people around and having folks beheaded. Actually, he was at his worst only in his later years, due mostly to a nagging leg wound that never healed, and, um…bowel issues. He also had a 52-inch waist, which exacerbated all the other problems. However, as a young man, he was very athletic, fit,  energetic, fun, and handsome. And boy, was he busy in the lady department…

And now, for your pleasure:

The Six Wives of Henry VIII — In Sentence Fragments

Meant to be Read Quite Fast

Anne Boleyn – Strong willed. Argues lots with Henry but gets her way. Too big for her britches. Gives birth to daughter (Elizabeth I), but Henry wants sons. Later miscarries a son. Big mistake. Henry wants out. Wants Jane Seymour. Must get rid of nasty Anne. Trumps up charges (adultery, treason, incest). Off with her head.

Anne of Cleves – German princess. Not too bright. Ugly, too, apparently. Henry sees her for the first time after marriage deal is made. Freaks. Marriage never consummated. Henry worries she won’t give him a divorce. He’s wrong. And happy. Divorces Anne but bankrolls her for life, treating her like a beloved sister. Maybe she not so dumm after all…

And there you have it. Have a delicious Wednesday. That reminds me…I gotta go to the bakery this morning.

3 thoughts on “This guy was bizzy”