Reading reports about the resources and personnel dedicated to security at the 2008 Olympic Games in China made me think this morning about a time when security was almost non-existent at the Olympics. Specifically, 1972, in Munich. 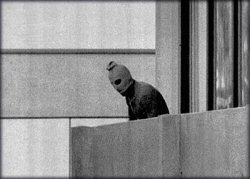 Who can forget this picture? I remember everyone being glued to their TVs as ABC’s Roone Arledge fed the horrible news into Jim McKay’s earpiece, giving him the unenviable job of telling the world, “They’re all gone.”

An actual terrorist attack had played out on live TV. It was surreal. Olympic athletes were taken hostage, and none made it out alive. The rescue effort still stands as one of the biggest, most tragic screw-ups of its kind on record.

I don’t actually remember watching a lot of the live coverage as it happened, but I remember my dad talking about it at dinner, and seeing it later on videotaped reports on the news. Just like when Lawrence Taylor broke Joe Theismann’s leg — they played it over and over and over.

Many have told the sad story very well; better than I ever could. There’s an excellent pictorial summary here, and a surprisingly well-researched account at Wikipedia. If you don’t know what happened on that September day in 1972, you should really go look. It’ll give you some clarity on the long-standing Palestinian-Israeli conflict, as well as shed interesting light on the predicament in which the German government found itself (that is, deciding how to deal with hostage negotiations when the hostages were Jews — many of whom had relatives who died in the Holocaust, just 30 years before).

In 2005, Steven Spielberg directed a film about the aftermath of the Munich massacre, tracing the experiences of the five men selected by the Israeli government to avenge the slaughter by assassinating key members of the Black September terrorist organization. The film, Munich, was nominated for Best Picture at the Oscars the following year. Trailer here:
https://www.youtube.com/watch?v=Hihqd2iL3rY

On a brighter note — the party for the Thriller’s birthday was fabulous. We had 18 people in for dinner and laughs. And now…back to Bach. Reality bites.