….and then there’s truly freakish. 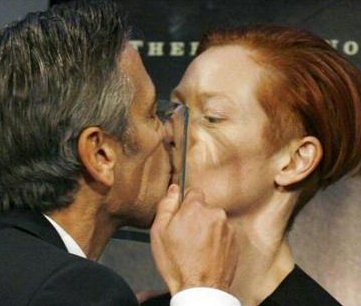 Ok what is THAT all about? I mean, I understand it’s a “kissing shield” or whatever, but why? Why not just hug or shake hands? And what do you do with the thing after you’re done with it? Ewww.

Sheesh. Only in Hollyweird.

Disclaimer to the skittish and easily riled: I make no religious judgments. Rather, I just comment on what I think is strange, creepy, troubling or simply wacko. So, if you’re a Scientologist, rock on. To each his own, and all that.

The religion is Scientology. Its scripture: the writings of L. Ron Hubbard. According to Scientology’s official website, the religion is based on an individual’s personal and spiritual growth. Fine. They list in their “Creeds and Codes” that all humans have a right to their own ideas and goals. Fine again.

But then, there’s the Xenu weirdness, wherein Hubbard postulates that 75 million years ago, an alien named Xenu came to earth, and…well, just click the link and read about it. Apparently, the Xenu documents were hidden from view until people began extricating themselves from Scientology (because, among other things, one has to buy one’s way to the next level of “clarity”). They have since become public record.

And somebody has gone to extreme research lengths to produce this site. It’s fascinating reading for sure; I spent 2 hours last night lost in it. The links are flipping endless.

The whole “E-Meter” thing is totally weird, too: 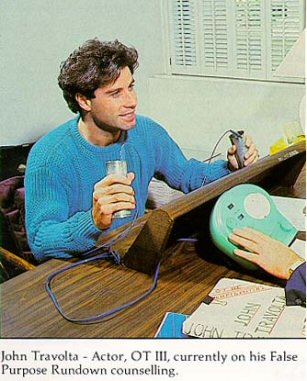 Of course Travolta’s an “OT III” level. He paid six figures to get there. The consistent thread I observed in all my reading was that many of the Scientology members interviewed are celebrities, business executives, TV and movie producers, doctors, attorneys; in other words, people with money. And you need money to advance through the levels. It’s a flavor of bizarre around which I am having trouble wrapping my reptilian brain.

That’s ok though. I get that a lot. I think I’ll read some more today, in hopes of having a Tom Cruise moment of ultimate clarity. Then, perhaps, I won’t come across as so terribly glib.