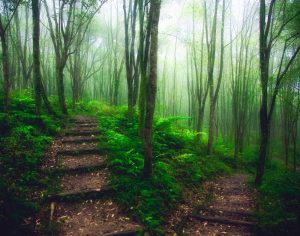 It might be a little hazy at this point, but our resolve is stronger than ever to press on. After yesterday’s third chemo treatment not going at all as planned, the Thriller has a decision to make.

We arrived at the Clinic and reported to the vampires as usual, so he could get his IV started. Like clockwork, we went directly to the 3rd floor and checked in at the desk for his appointment with Erin, the oncologist’s assistant. After waiting a bit, they called his name, and we went down the same hallway to the same exam room. All seemed as it should be — until the door opened, and in walked Dr. Velcheti himself. We knew something was up.

Unfortunately, Monday’s CT scan revealed more cancer; this time, in his liver. Despite drenching him in carboplatin and pemetrexed twice in the last 6 weeks, the tumors still grew. Chemotherapy was now off the table. I wasn’t looking at Michael at that point in the conversation, as I was trying to keep from crab-walking on the ceiling. What do we do now?

Dr. V. told us about a clinical trial involving a combination of two drugs (I can’t remember their mile-long names at the moment) in pill form, paired with a regimen of IV infusions of the drug Opdivo — a relatively new treatment for several types of cancer. Opdivo alone is the standard treatment for patients with advanced NSCLC for whom chemo didn’t work, but this study involves the other two drugs. Therein lies the choice.

Do we start the Opdivo next week, or choose the clinical trial and possibly wait up to 25 days to begin? And it’s not just the wait; at least two biopsies have to happen, before and after treatment. It was all so much information to take in, I can’t recall everything without looking at the paperwork they sent home with us — which we decided to pass on studying last night in favor of relaxation.

When we went to bed, I think he was leaning heavily towards going for the clinical trial. As he’s still asleep, I’m not sure if he’s changed his mind or not. We’ll find out today and make the call, one way or the other.

So, more travels on different roads, leading to who knows where. Was it this hard for Odysseus? :-/  Regardless, I’ll keep you posted as we go — hopefully with some great news.

So sorry to hear this Linda. My heart goes out to you both.
If you need anything at all , please don’t hesitate to call me. It’s a tough road and very hard on both of you.
My thoughts and prayers are with you always. Love you.

Thanks Aunt Deb — I love you too! I will keep you and Janet/Carol/Tina posted on his progress.

I searched current clinical trials looking to match what you mentioned. I didnt find a perfect match but doing so reminded me of the issues surrounding such trials. Notably, what makes the thriller a good candidate; what phase is the trial; and what is primary outcome measure or endpoint. Ideally that measure would be Overall Survival. Unfortunately the FDA now allows so many varying endpoints that are not helpful to patients, like progression-free survival, which instead service the drug companies. The primary patient-side argument made for joining a trial is the very high level of clinical scrutiny the patient recieves… Read more »

Ross, I grabbed the paperwork just now, as it was in the same room where he was sleeping. The two drugs are decitabine (approved by FDA) and tetrahydrouridine (experimental). I actually found our doctor’s feature on it here. You’re right about the patient-side argument. Moreover, it won’t mean anything if he’s not selected, and he will have undergone the biopsy and eleventy hundred blood draws for nothing. But he’s willing to risk it. I hope he’s chosen. If not, we go on — anything else is not a choice. Thanks for thinking of us — I know you’re no stranger… Read more »

Keeping your family in my prayers, Jax!

Thanks so much, Yarg! At this point, with you-know-what starting on Monday, I’m a little ooky about leaving home.

Praying for you both for strength and peace thru this difficult process.

Thanks Deb, and right back your way. <3

Praying for you both and wishing there was more I could do to make your life better right now. I haven’t yet figured out delivering a homemade dinner from four hours away. Peace and wisdom be yours.

That is so sweet, Lori! Just seeing you post here does a world of good. He’s going ahead with the clinical trial — I will keep you all posted!

Sending so much love to you both. Damn those winding roads….beautiful at times, complete hell at others. Keep us posted as you see fit and know that we’re all praying and sending strength your way.

These messages of encouragement keep me going, Darice. Thank you!

Whatever he decides we are all here for him! (and you!)

Thanks — I love you Suz!

praying every day for you both for strength and healing.