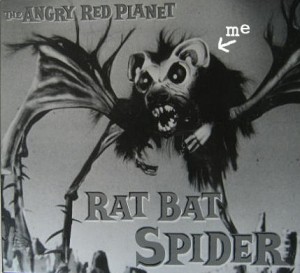 Restraint has never been my strong suit when I’m on about something. Heh.

Last night, a student posted something unkind on Twitter, aimed at Stoney and me. You know the drill:

Of course, my first instinct was to fire back with my best work, putting this person in his/her rightful place. In fact, I had it all typed out on my phone and ready to go, and it was a doozy. Wrecking ball, quality stuff. I stared at the little icon that said “TWEET” for a good 10 seconds before finally backspacing what I’d written and canceling out. I went over the reasons why in my head:

I considered it a victory indeed. At least until I see this person today. HA

Why is it so hard to leave personal slams hanging in the ether? Is it because we don’t want to be viewed as weak; unable to defend ourselves? Or maybe it’s because of what I like to call “last wordism.” Ain’t nobody say that to me and walk away with it. I must admit that’s usually my M.O. The well-placed zinger has often left me with regret. (“Man, I wish I hadn’t said that…”) Sometimes I forget the difference between defending my position and just leveling the better insult.

But last night, I took the high road, I want you to know. I said nothing. How about that?

Hey, GUESS WHAT DAY IT IS.

I, too, struggle with last worditis. Not just to be right, but to have someone say “touche”, which probably means I really zapped someone. Feels good for about 30 seconds, all for the satisfaction of someone thinking what I said was “well said”. But, it hardly ever is.

I don’t know what you had originally typed, but I’m finding more and more that the backspace key or highlight-and-delete has been a great friend to me in the last few years (ok, maybe just the last year). Regardless of what you wrote… your non-response speaks volumes. So, well said.

Good for you! A big pat on the back to you. When I was a kid, my mother often quoted Prov. 15:1 to me and my siblings when we had a spat. Someone told me that it was important for me to learn to toughen my skin without hardening my heart. Kudos to you for showing restraint in this instance.

Jax,
I saw the tweet last night too, and part of me says you should have sent the tweet in reply to put them in their place, but I’m really proud you didn’t because they would have just kept going. Nice job on showing restraint.

Karma, my dear. The scale that always balances itself. To quote Sting: ‘It takes a man to suffer ignorance and smile.’ So when you see her, give her a great big smile. But on the other hand…. To quote the Bible: Indignatio principa mors est (sic) Proverbs 16:14. (The wrath of the Queen is death). -*with apologies to R.D.’s mom, and no disrespect intended* By your not responding (and smiling to boot!), she will be waiting for the other shoe to drop. And waiting… and waiting….. That is a kind of punishment that is more effective than any zingers, no… Read more »

I have been trying to think if I ever read an intelligent thing posted on Tweeter…nope, never have! I too am proud of you hitting the backspace! The hardest thing to know is the “when” about all this, when to respond and when not to respond. I’ll throw this Biblical truth out there: Proverbs 26:4 “Do not answer a fool according to his folly, or you will be like him yourself Don’t answer fools according to their folly, or you will become like them yourself” Sometimes it’s a yes and sometimes it’s a no. PK said it best…let the child… Read more »

Very very good, Missuz!!!! I have been struggling all week not to have my say with a couple of select people. Why o why I/we let these people of lesser-ness do this to us I will never know. It’s better to back away from the keyboard and just….let it go. I do feel better knowing that I haven’t given in to “last wordism”.

And anyways….the 16-yr-old will get his/her karma someday and the waiting for your response has been killing them. SCORE!

Good job, Lady. I’ve had to “resist the urge” while reading so many ignorant political posts lately. I keep telling myself, “Just stay out of it.” Loved PK’s comment. The student just may be losing sleep wondering when the “other shoe will fall!” Yes!

Everybody!! Thank you so much for your supportive comments.

I am just happily proceeding with life, trying to find the good in every day, just like y’all. And there is plenty of good! Fortunately, there are lots of great kids at my school, and that goes a long way towards just letting go of what needs to be let go. Ya know?

Anyhow, you’re all fantastic. See why I do this little blog about nothing?

Update — just had a really good chat with the person. All is well!