If ever an attraction lived up to its hype, it’s the Grand Canyon. It’s so amazing, photographs cannot do it justice — but I’ll give it a shot.

Before we get to that, though, there was another marvel — the Hoover Dam. While we didn’t stop and do the tour (which meant we were on the “wrong” side of the dam), we did get some great photos of the river and the other side of the structure: 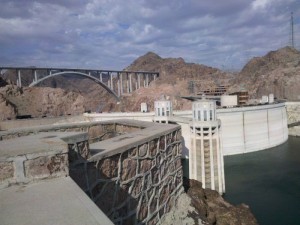 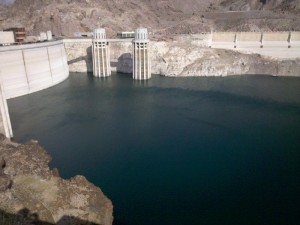 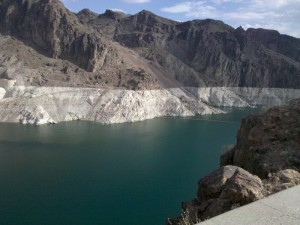 The river level is definitely down

But then, the Canyon. There were a lot of people there, as we expected. [The cool part about that? We bypassed the endless lines of folks giving up their $25 at the fee collection booth because the Thriller has a Golden Access Card from the Veterans Administration, which means free admission to any national park for the rest of his life. Heh heh. JUMP to the front of the line.]

We parked and walked a short trail. The Thriller said, “Here it is!” I said, “I don’t see anything.” We crested a small hill on the path, and this is what I saw: 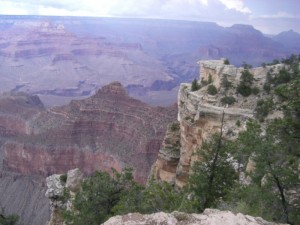 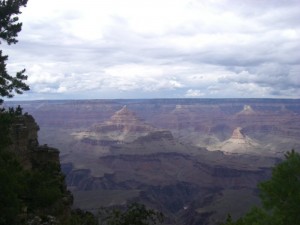 The most unbelievable part of these vistas: no railings. No safety precautions of any kind. You step off the ledge, you fall a mile. Period. Each time I’d inch forward a bit to get a better photo, the Thriller would say, “Hey, hey, HEY. That’s close enough.” It’s exhilarating, yet completely terrifying.

Of course, that didn’t stop people from walking on outcroppings and even sitting on edge rocks and dangling their feet. I have a picture somewhere of a guy doing just that. I’ll upload it to Facebook. But this is generally what I mean: 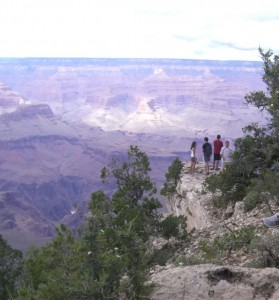 The GC ranks as a real highlight of this trip. I’m so glad the Thriller suggested it! I have a ton of cool photos to upload to Facebook of our time here in historic Williams as well.

Back on the road we go. Actually, we’re going off-roading today, through Navajo country, ending up in Pueblo late tonight. Happy, um, whatever day it is.

It’s so hard to describe that in words, or even in pictures…because the pics have a much less “wide ange” perspective than the human eye. You really do have to be there to soak in the majesty of it all! I’m soooo glad that y’all made that one of your stops.

Absolutely, sweety. We looked at the pictures and both commented that they don’t do the real view justice. It’s just one of those places to put on one’s “bucket list.” We loved it!

Thats awesome! I have always wanted to go and see the Grand Canyon, definitely on my to-do list for the future

You have to make it happen, JR. It’s like nothing else you’ve ever seen in your life!