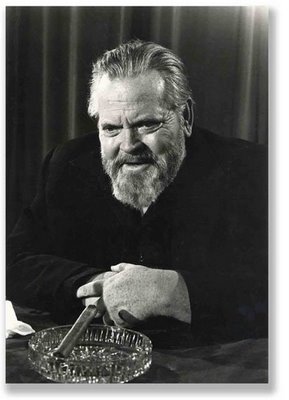 Every once in awhile, somebody brings up Orson Welles. You remember him…he was a large man in his later years, and never went anywhere without his big ol’ nasty stogie.

He was a polished actor — viewed as one of the best of his generation, starring in what has over and over again been voted the best black-and-white-era movie of all time: Citizen Kane.

But do you know (certainly you do) that Welles was also responsible for the biggest Halloween hoax — and most dramatic episode of public panic — of all time? I can never get enough of this story. I just wish I’d been there.

Ok, not really. I probably would have been one of the people hiding out in their bathrooms with a vial of poison, ready to end it all. Mulder and Scully would have loved it, though.

I have often imagined what it would have been like to have my ears glued to the radio (no TV in 1938) when the Mercury Theater show started. Nice music, some commercials for deodorant or whatever, then back to the show. All of a sudden, an “announcer” breaks in:

Ladies and gentlemen, we interrupt our program of dance music to bring you a special bulletin from the Intercontinental Radio News. At twenty minutes before eight, central time, Professor Farrell of the Mount Jennings Observatory, Chicago, Illinois, reports observing several explosions of incandescent gas…moving towards the earth with enormous velocity.” 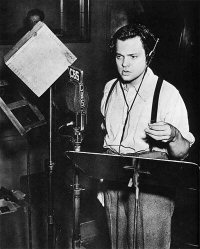 Would you have freaked? Or at least been concerned? I have no clue as to the dangers of “incandescent gas,” or incandescent anything for that matter, but it sounds ominous. Back to the music.

What followed was an amazing parade of bulletins — each one becoming more dramatic, frantic, and out of control. And even though Welles, who accurately suspected the possibility of public hysteria, dropped in announcements that the show was just pretend, people still flipped out. According to transparencynow.com:

People packed the roads, hid in cellars, loaded guns, even wrapped their heads in wet towels as protection from Martian poison gas, in an attempt to defend themselves against aliens, oblivious to the fact that they were acting out the role of the panic-stricken public that actually belonged in a radio play.”

War of the Worlds. Awesomely awesome. You should really read the whole script. Poor folks, though. Talk about punk’d.

4 thoughts on “The Most Awesomely Awesome”